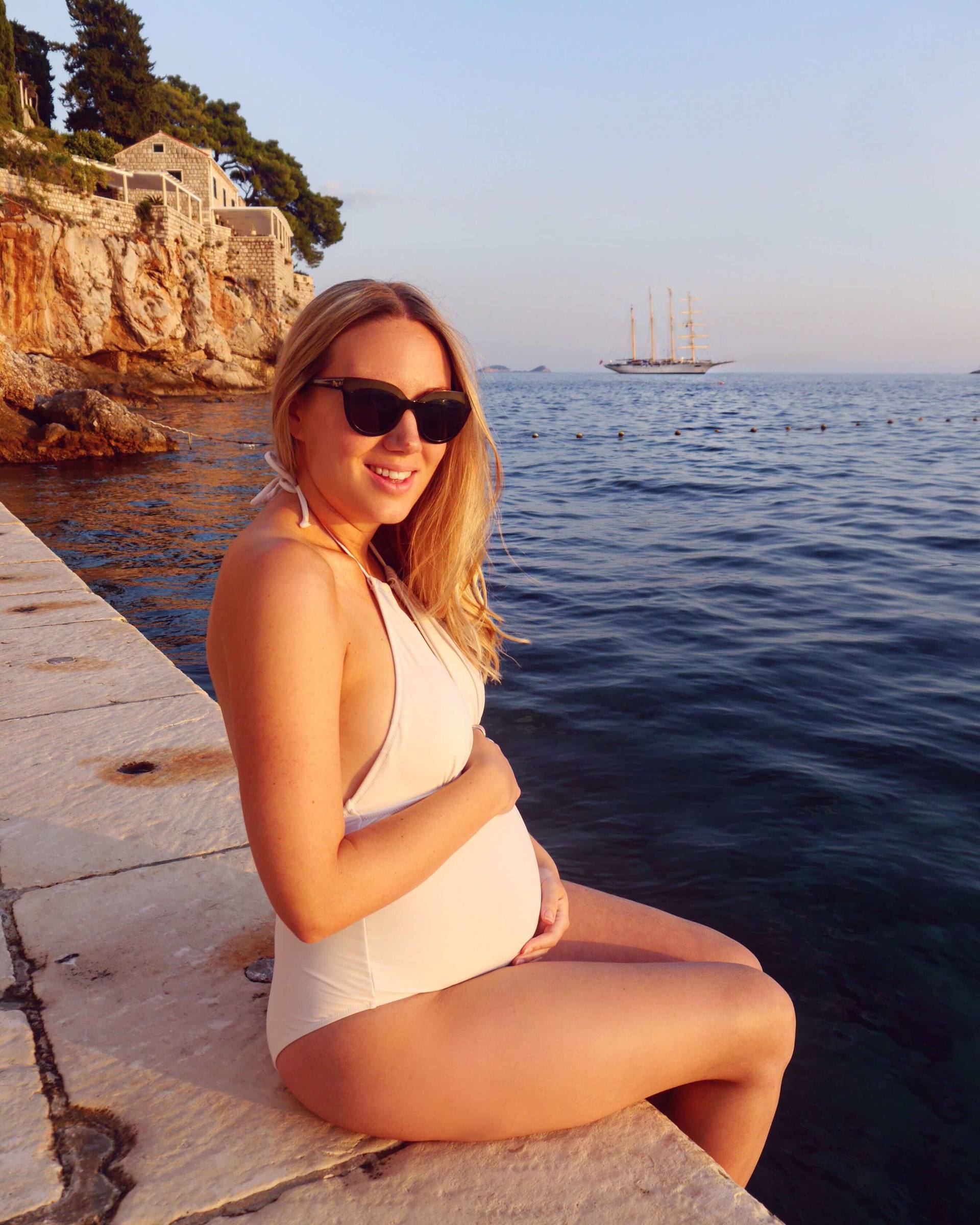 Our babymoon in Dubrovnik was very special for a number of reasons. It was to be our final overseas holiday as a couple before our baby boy arrives in February. It was also an independent trip organised completely by me, as a surprise for Scott’s 30th Birthday. Whether you like or loathe the term, we decided to count this trip as our official ‘babymoon’. To me, our time in Dubrovnik felt incredibly poignant as it marked the end of one era, and the start of another. From now on, my travel style will have to adapt around my new role as a Mum and our trips exclusively as a couple will probably be few and far between. Because of this, I wanted to make our Babymoon in Dubrovnik extra special and memorable. Here’s a little insight into what we got up to on our 4 night trip to Dubrovnik. 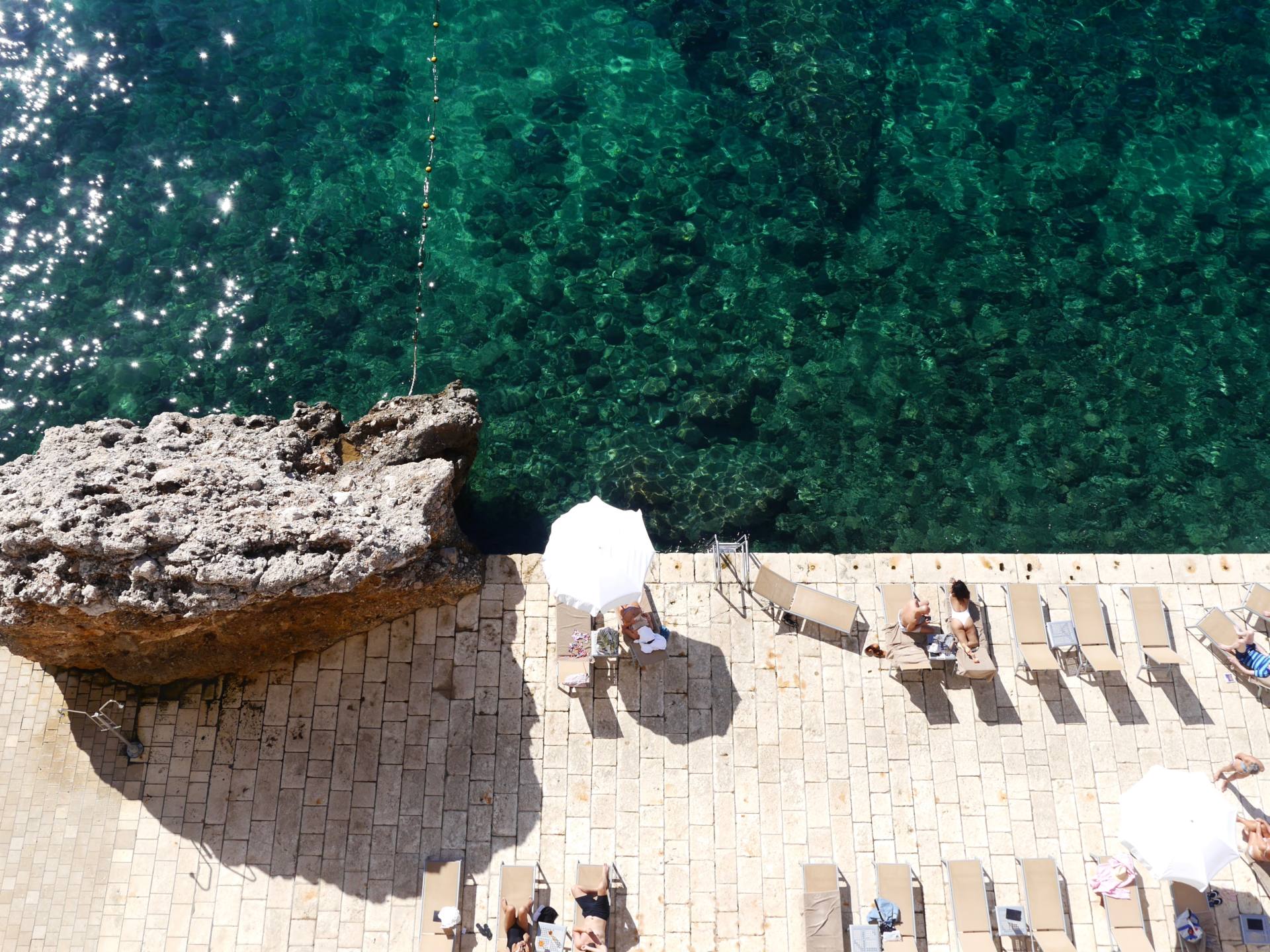 Choosing To Have our Babymoon in Dubrovnik

Dubrovnik may not be the most typical of Babymoon destinations, but I was attracted to it for a number of reasons. Firstly, we were going in October so I wanted to make sure that the weather would still be sunny (or pleasant t-shirt weather at the very least). The weather in Dubrovnik in October ranges between 22 and 15 degrees, which sounded ideal. Secondly, I wanted a destination that gave us the option to soak up some culture and do some sightseeing, as well as relax by the pool (I may have been 23 weeks pregnant, but I am still a travel blogger programmed to explore!). Thirdly, I wanted to pick a destination that would excite Scott. He’s a huge Game of Thrones fan, so I knew he would love seeing all the Kings Landing filming locations inside Dubrovnik Old Town. For these reasons, it ticked a lot of boxes, so I jumped onto Skyscanner and started searching for cheap flights. 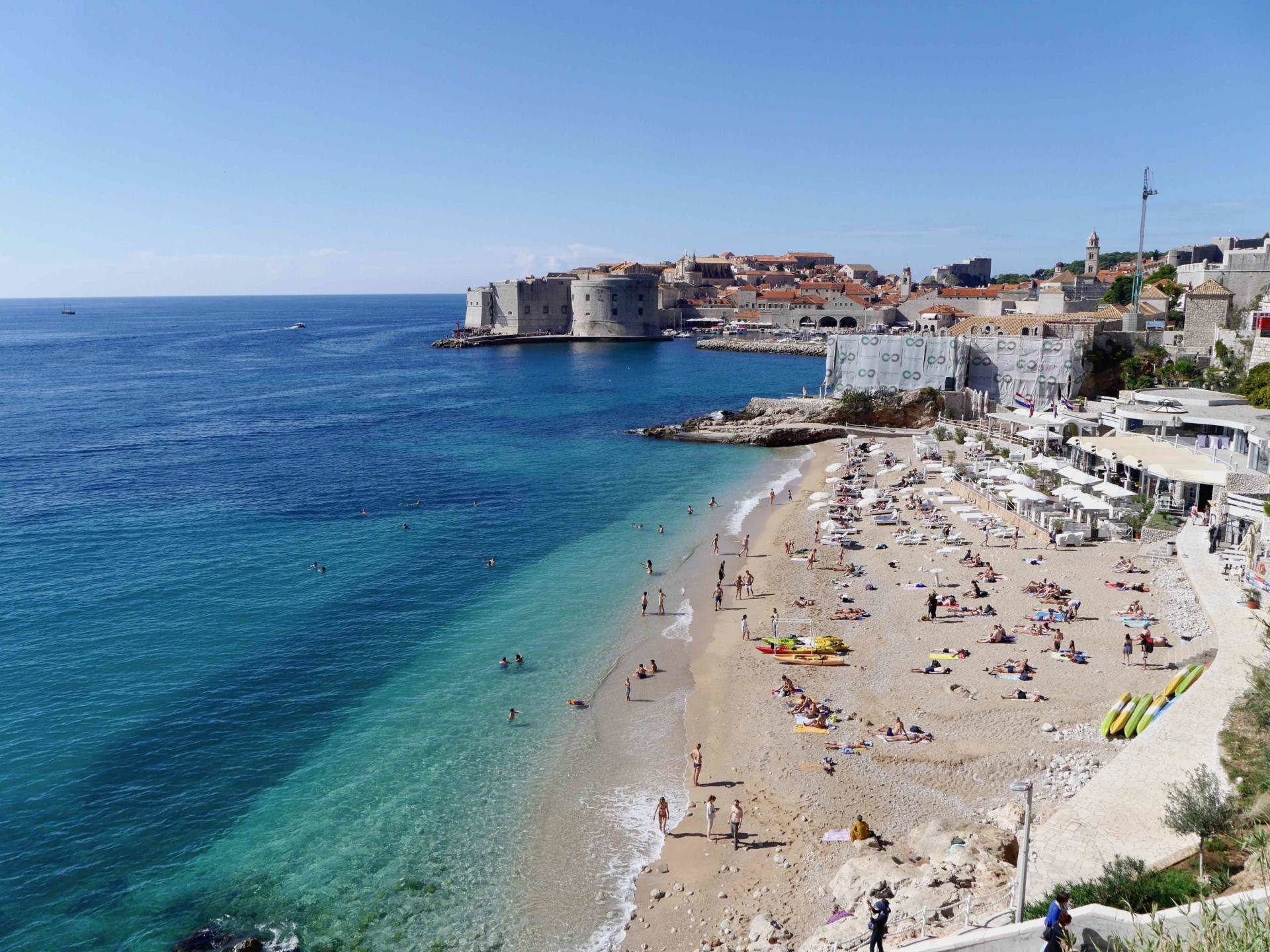 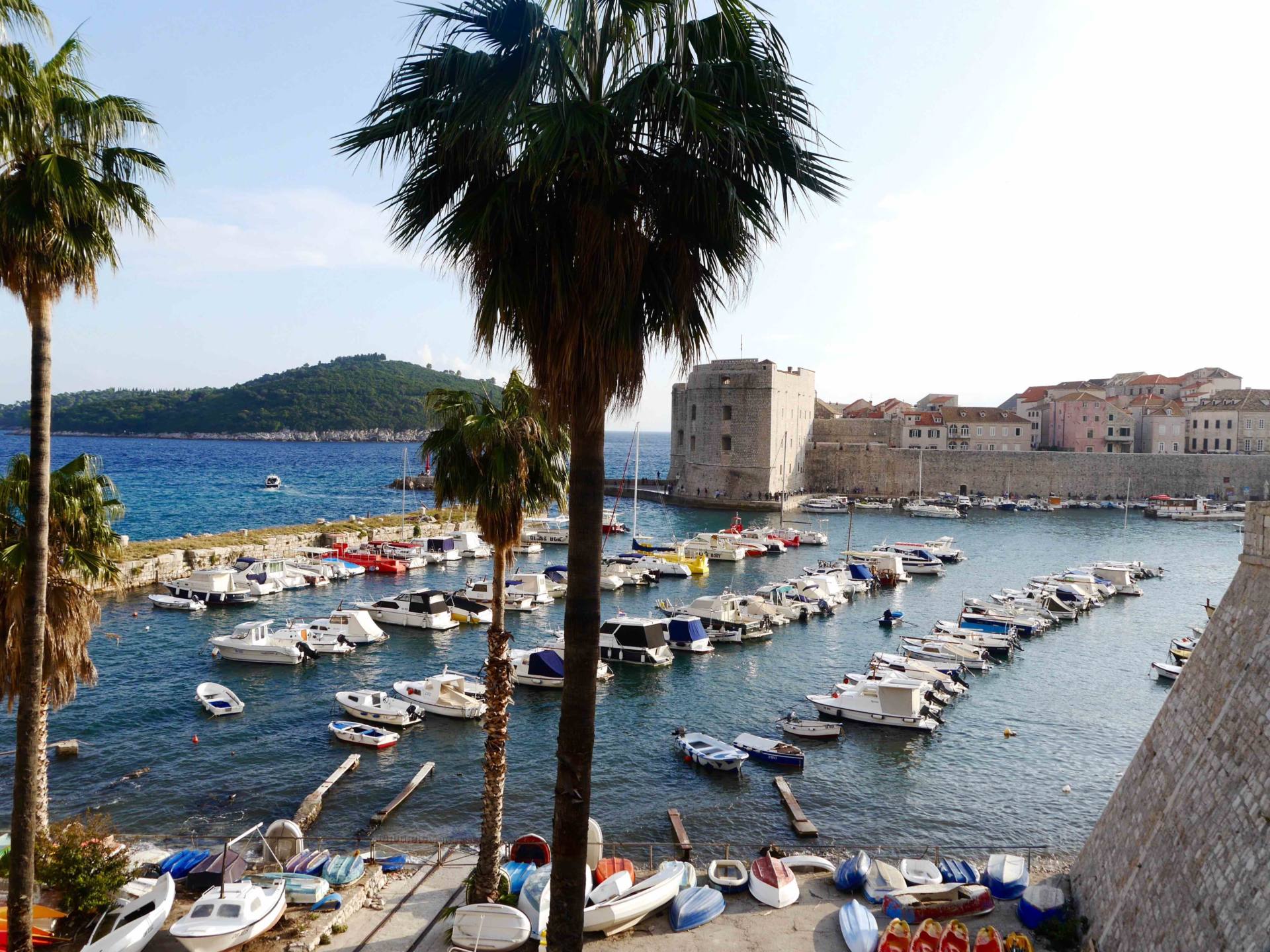 Surprising Scott with our Destination

I managed to keep our destination a complete surprise from Scott until we were sat in the departure lounge. I had the boarding passes on my phone, so he even passed through security without a clue where he was going. At around 6am (it was a super early flight), I presented him with his clue about where we were going. I had got my geek-on earlier that week and written him a rhyming letter / poem from Game of Throne’s character Jon Snow. The letter had clues about the destination we were going. I stained the print-out with tea and tore the sides, before rolling it up like a scroll. I had great fun putting it all together, knowing I’d get to surprise him at the airport! He guessed ‘Croatia’ straight away, and began to get equally as excited as me. 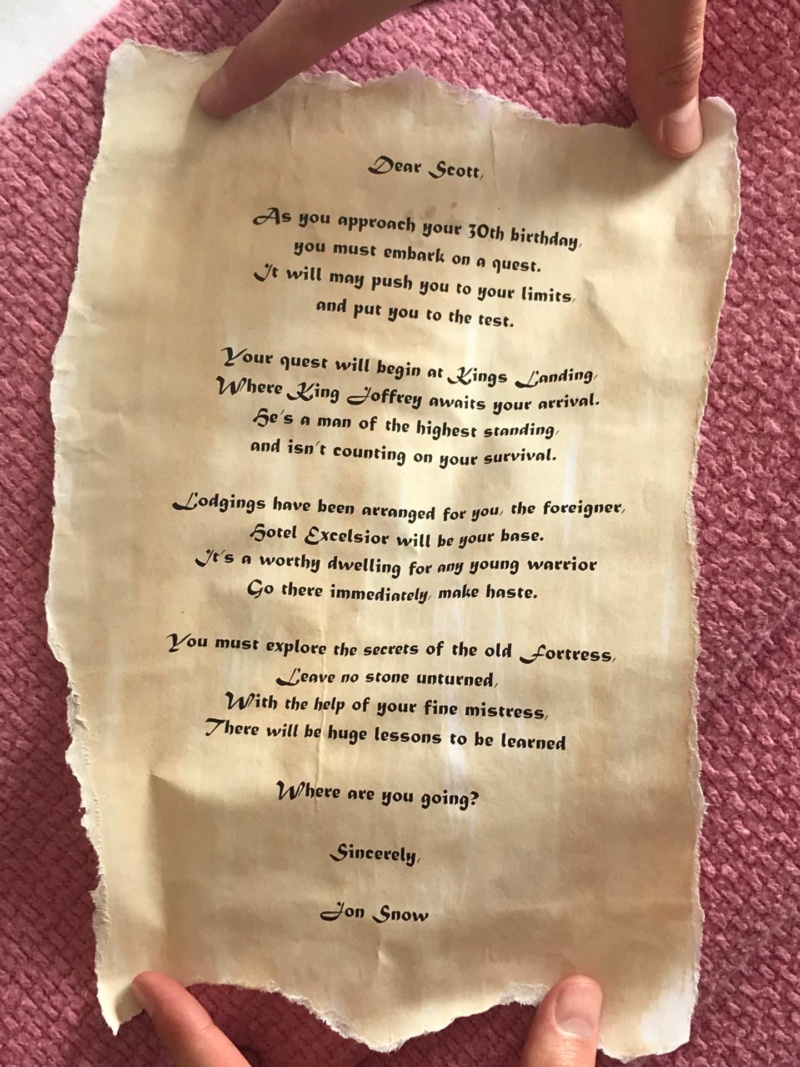 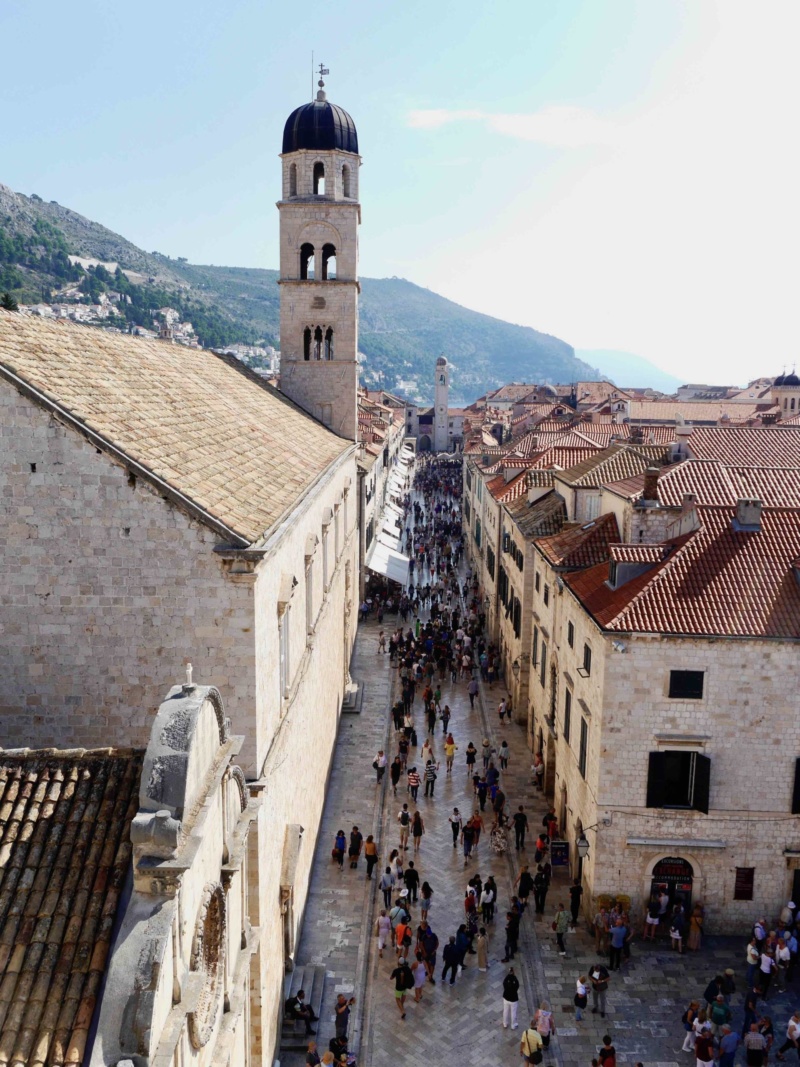 As this was an extra-special trip, I didn’t want to make any compromises. I started researching hotels in Dubrovnik back in May, and one name kept cropping up; Hotel Excelsior. The hotel’s location looked perfect. It was a 5 minute walk from the gates of the Old Town, which meant we’d be in easy reach of the hustle and bustle but far enough away to relax. I also loved the look of the hotel’s waterfront-location which had incredible views of the Adriatic and Dubrovnik Old Town. It was boutique in style with a gorgeous spa, indoor pool and steps into the ocean (plenty of facilities for the relaxing aspect of our holiday). I also loved that it was part of Small Luxury Hotels, which was enough to persuade me to book in for 4 nights. Stay tuned for my full hotel review of Hotel Excelsior, coming soon on the blog. 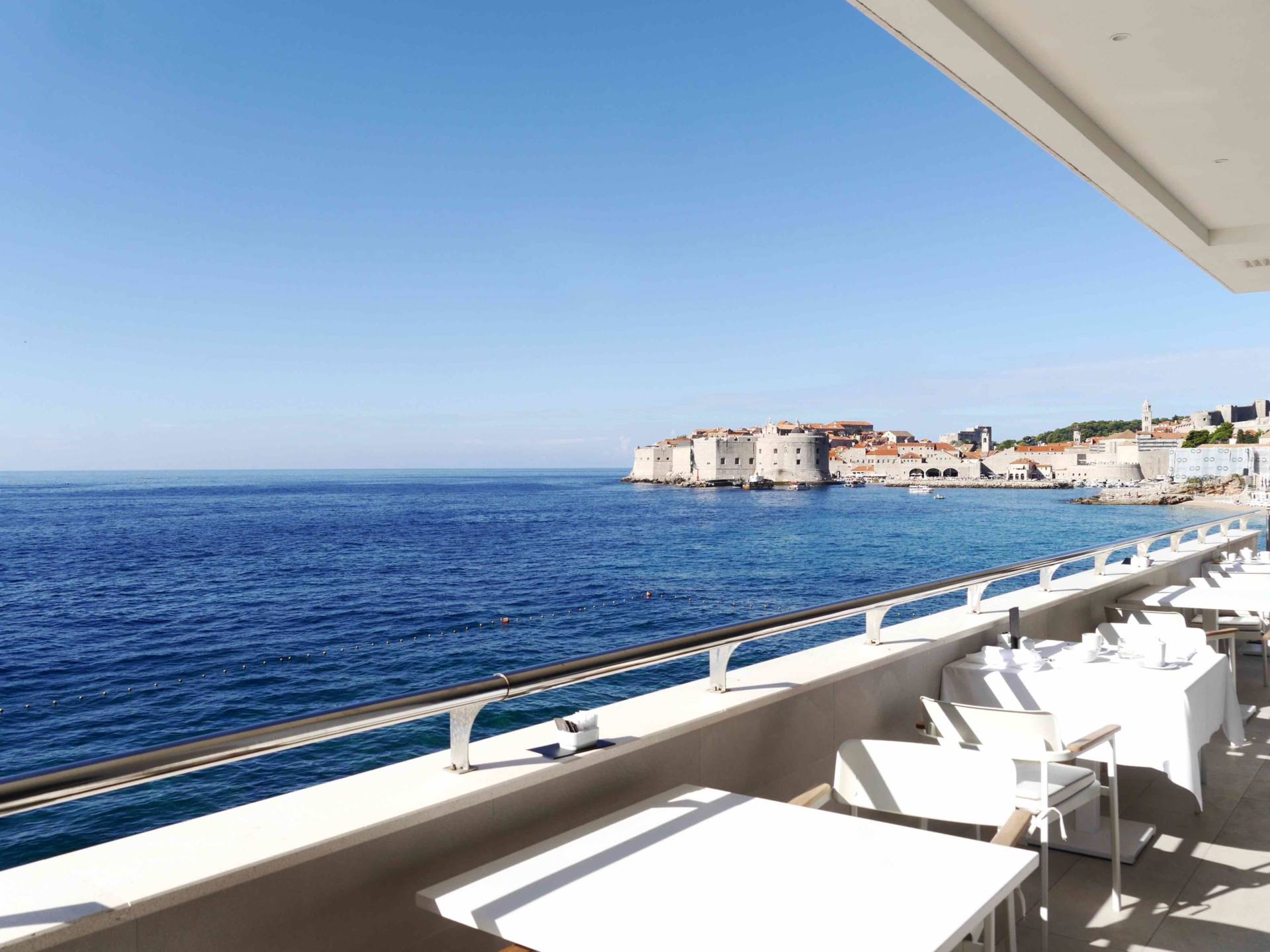 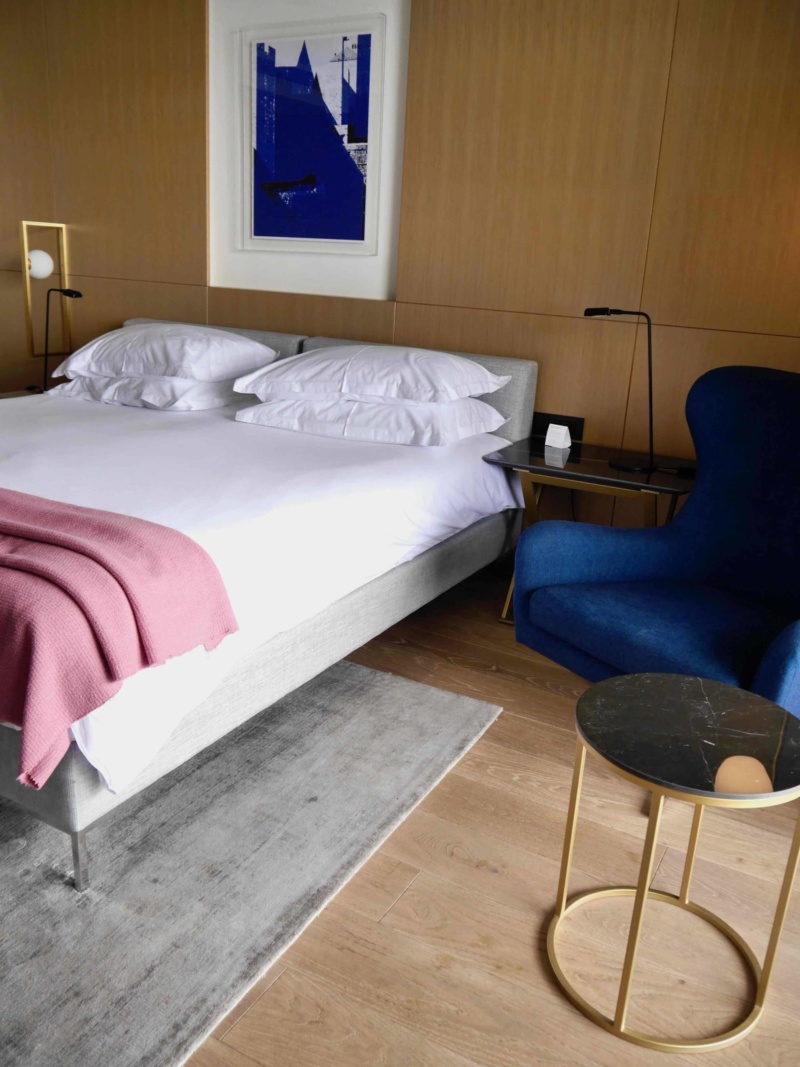 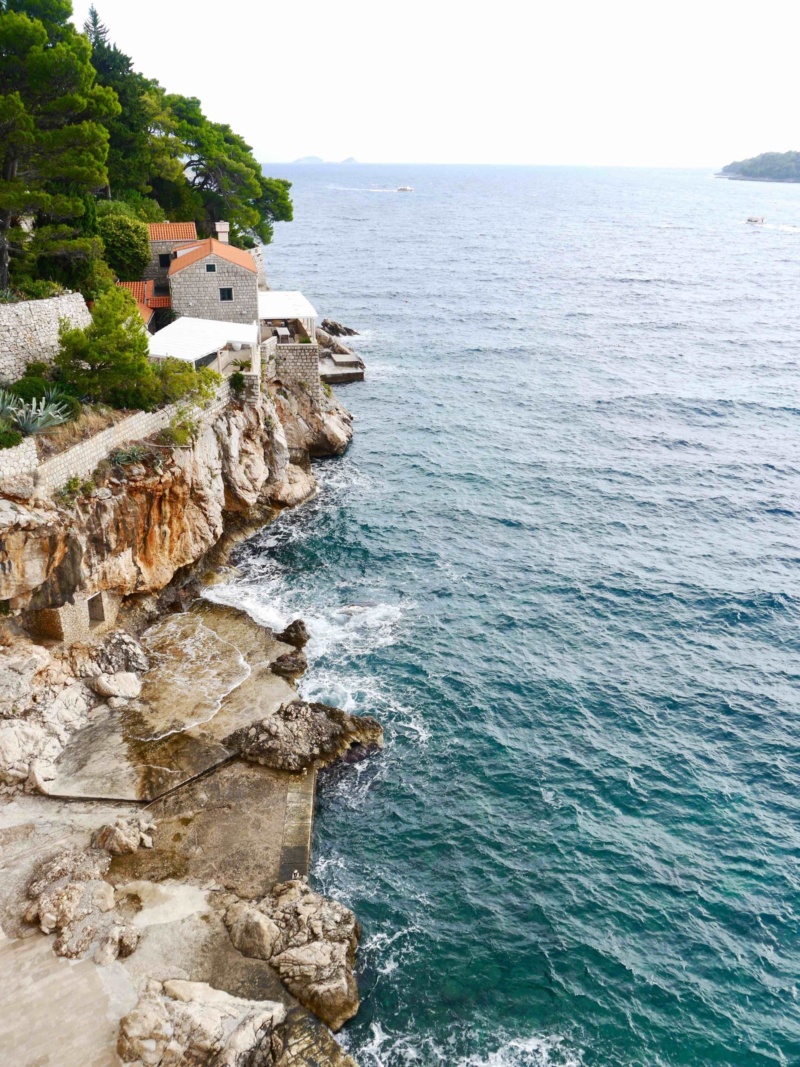 How We Spent 3 Days in Dubrovnik

Day 1
On Day 1 we decided to get the ultimate view of Dubrovnik with a trip on the cable car (150 kuna / £18 per person). It was a perfect day with blue skies and sunshine, so the views were absolutely stunning. We stopped for an iced coffee in the panoramic restaurant and just spent time soaking it all in.

That afternoon we headed to the old port and caught a boat over to nearby Lokrum Island which is a 15 minute ferry away (150 kuna / £18 per person). There is plenty to explore on the island including a Game of Thrones exhibition, featuring an exact replica of the Iron Throne. 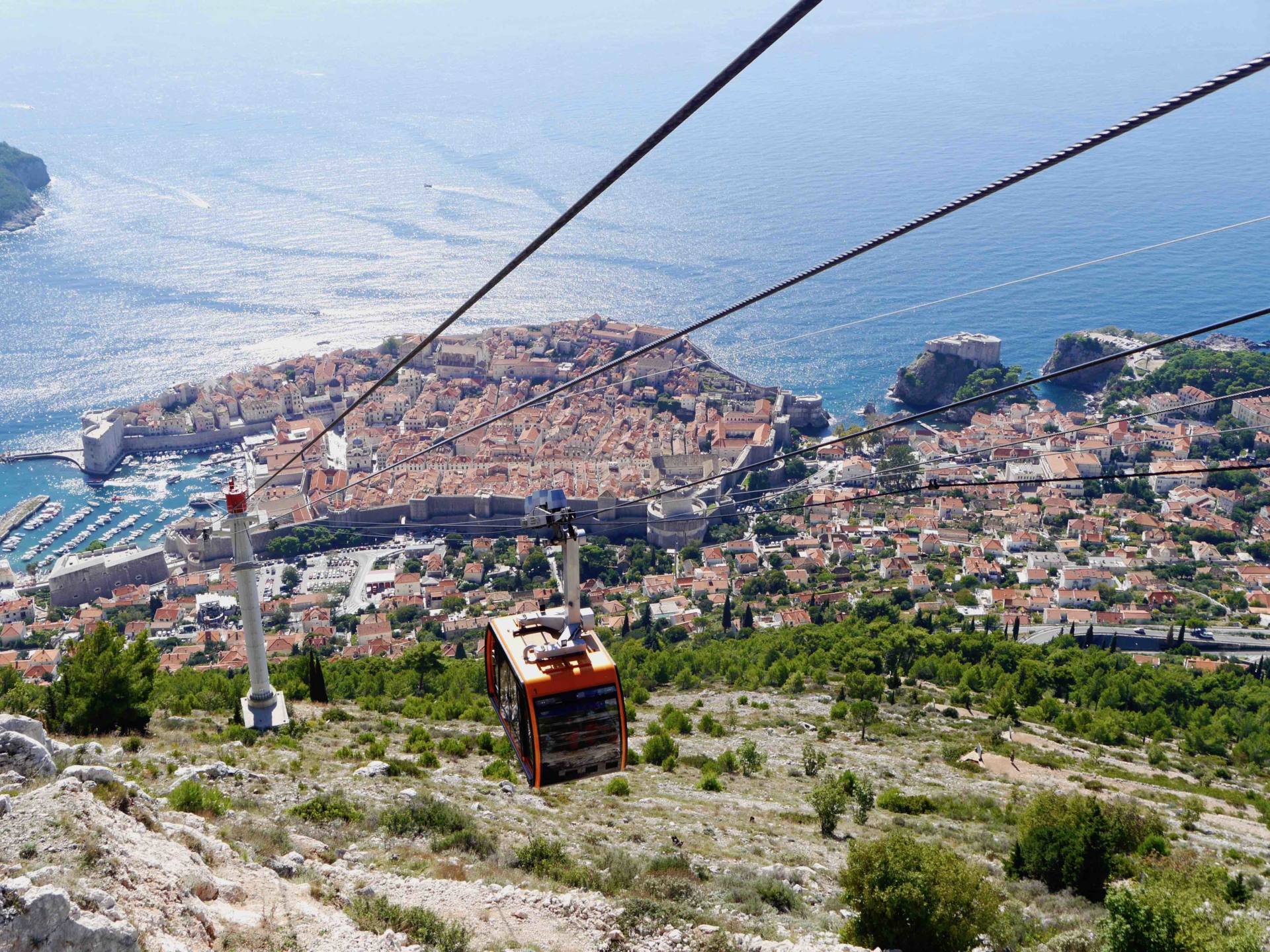 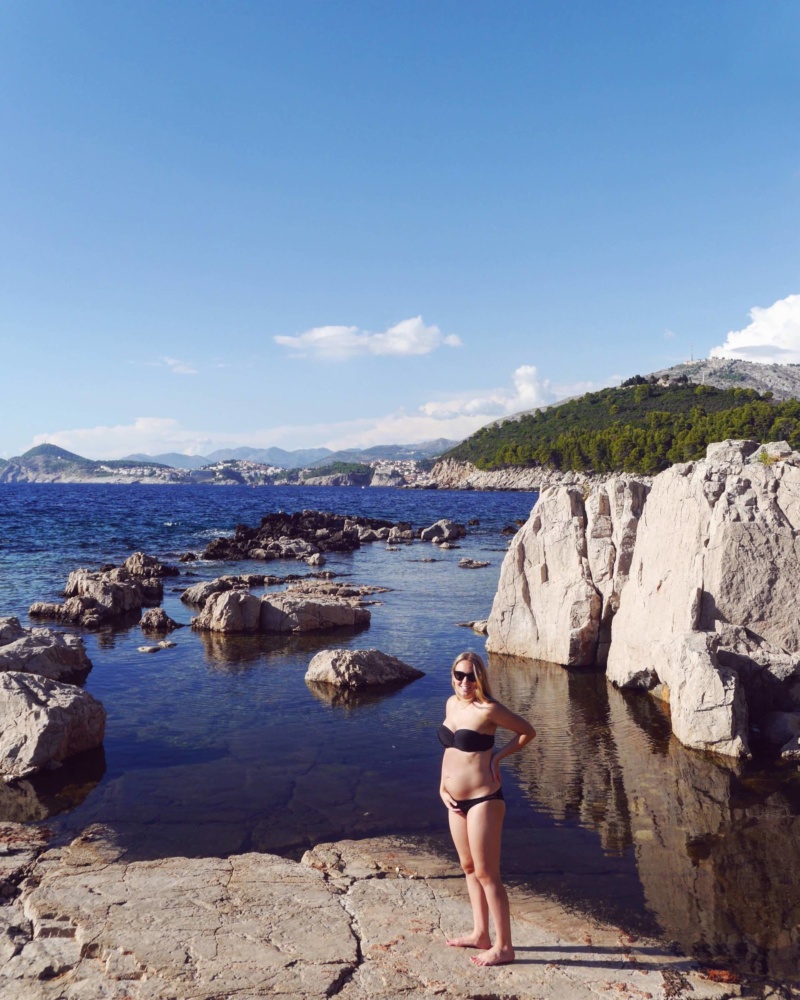 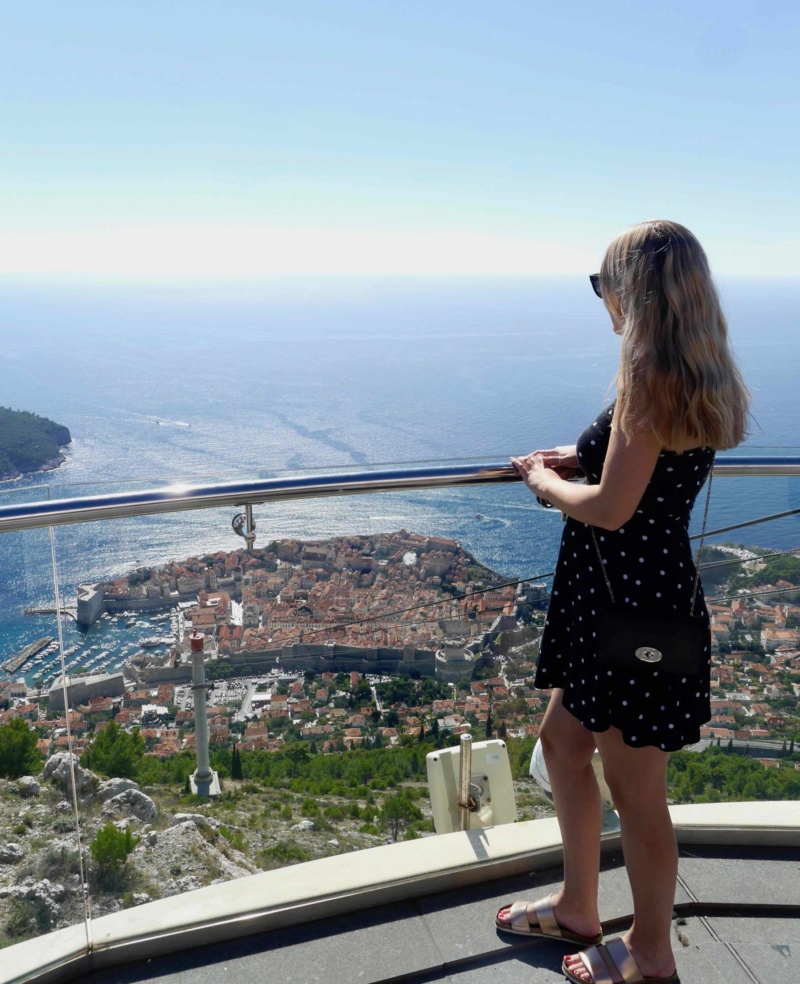 Day 2
Day 2 began with a walk around the ancient city walls in Dubrovnik Old Town. This is one of the top things to do in Dubrovnik and the walls can get crowded, so it’s best to do them early or late in the day.

There were so many beautiful view points and perspectives of the ocean and the old town from the walls. We also spotted a few more Game of Thrones filming locations too. The 3km walk around the walls was quite tiring, so we spent the afternoon relaxing by the sea and watching the beautiful sunset at Hotel Excelsior. 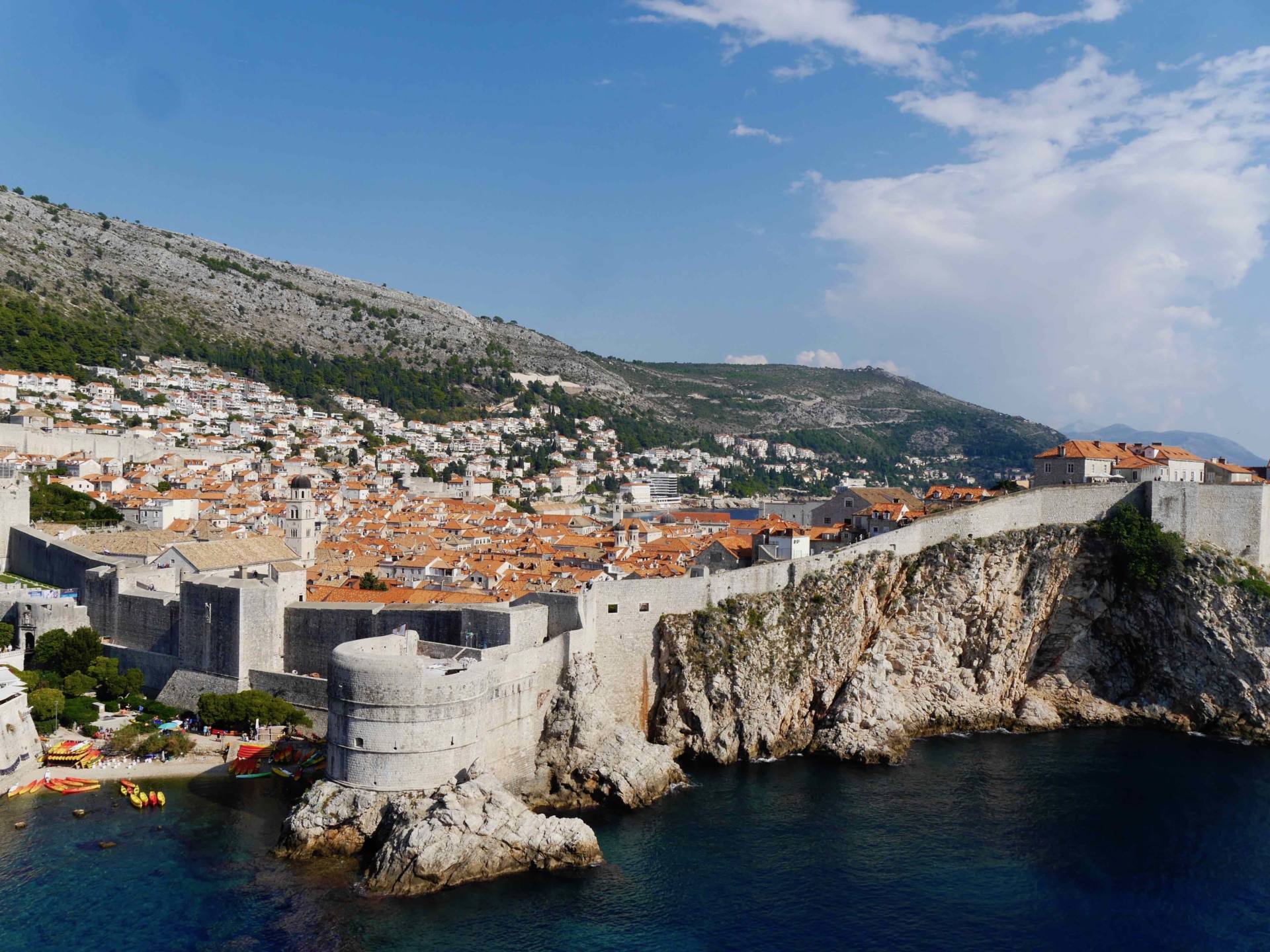 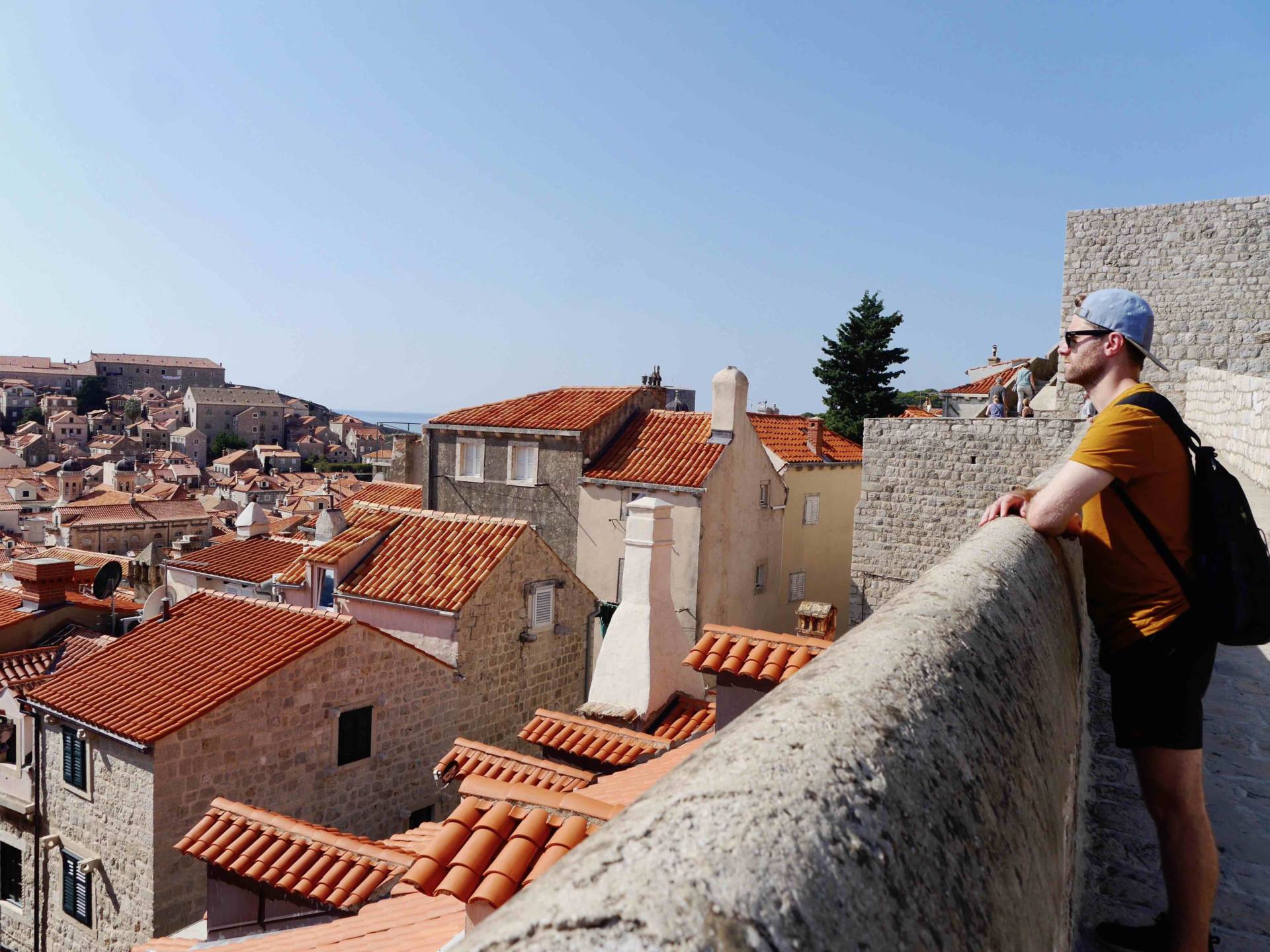 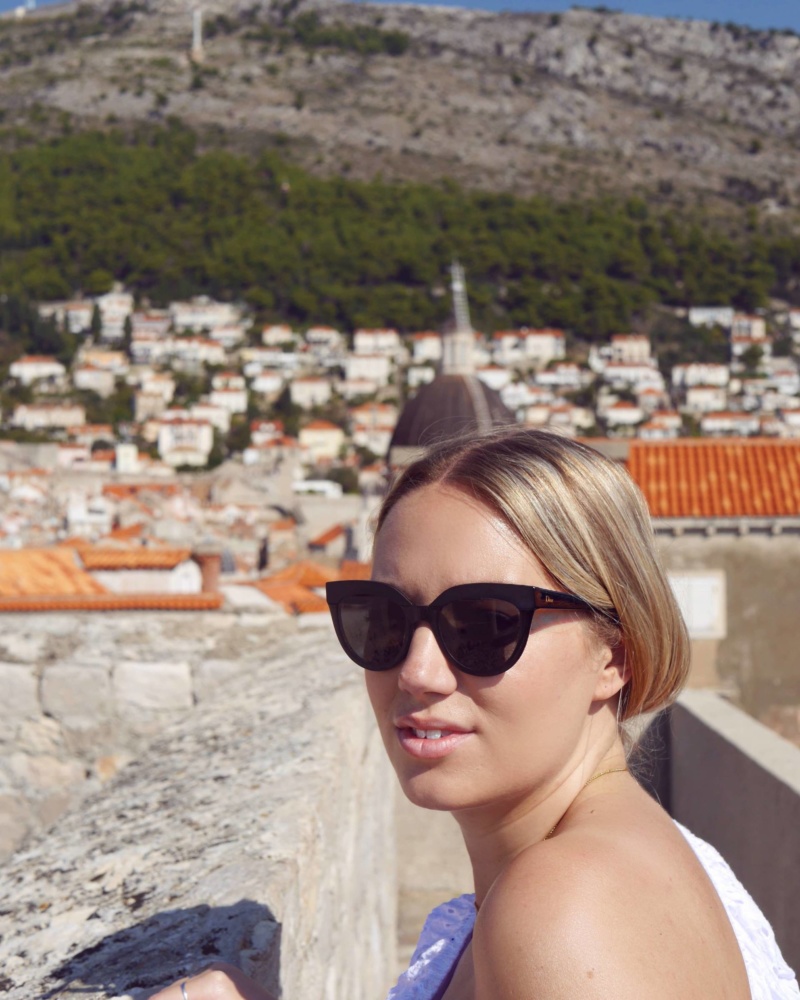 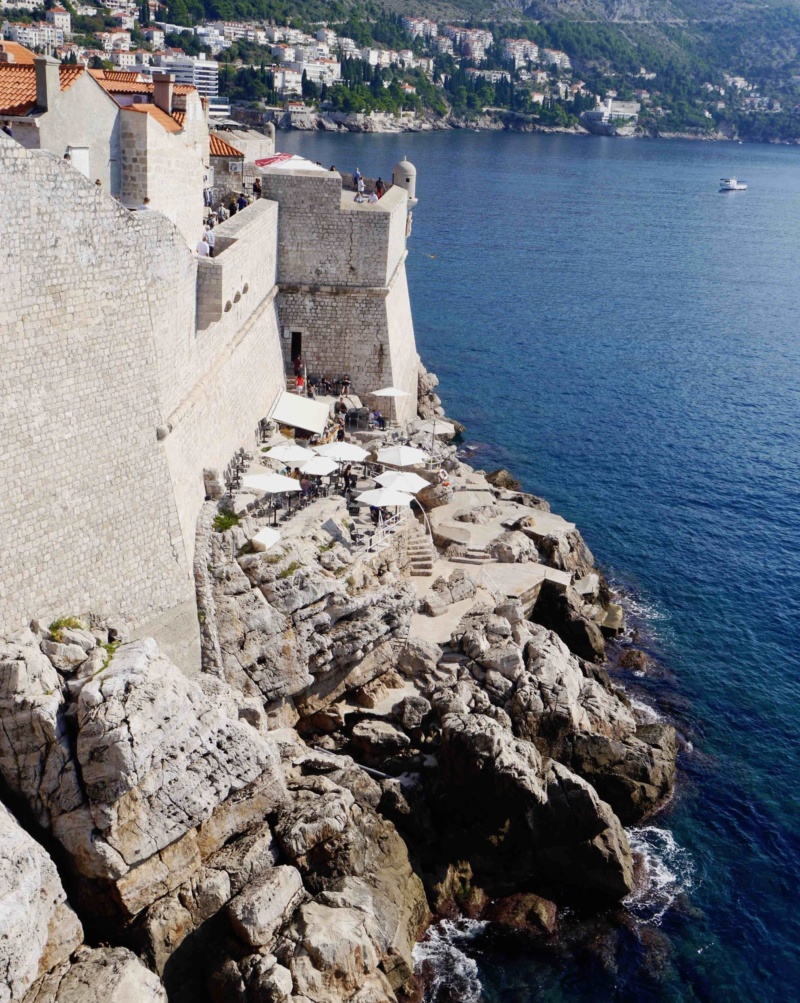 Day 3
Day 3 was Scott’s 30th Birthday, so I booked us on to a surprise boat trip around the Elaphiti Islands (Kolocep, Lopud and Sipan). I did some research on boat trips before the trip and after reading good reviews, I decided to book on to the Elaphite Islands Full-Day Karaka Cruise from Dubrovnik. We spent the day on the iconic Karaka pirate ship, which sailed from island-to-island seamlessly.

The tour included transfers from our hotel to the Dubrovnik Port, a delicious buffet lunch on board and one complimentary drink. The crew were fantastic, as were the tour guides and the on-board band (who serenaded Scott with ‘Happy Birthday’). We had an amazing day onboard the ship and I’d definitely recommend this tour to others. 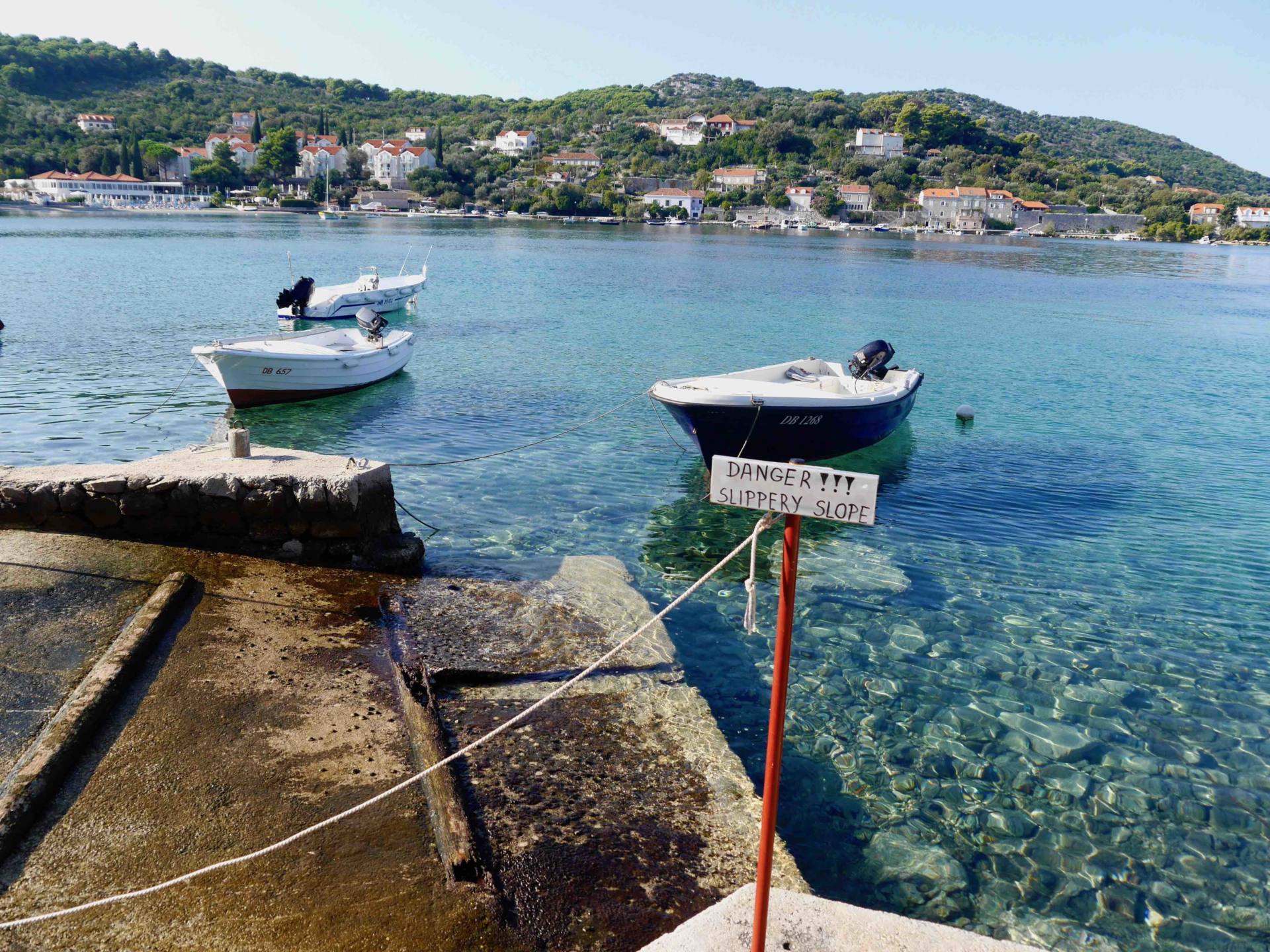 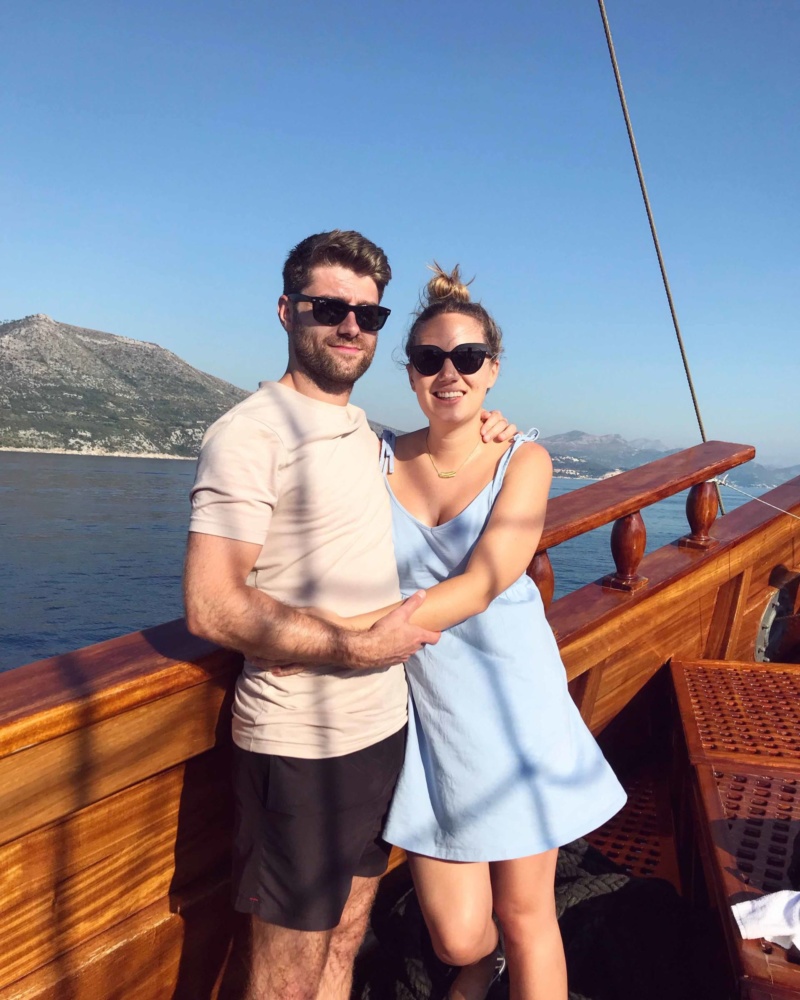 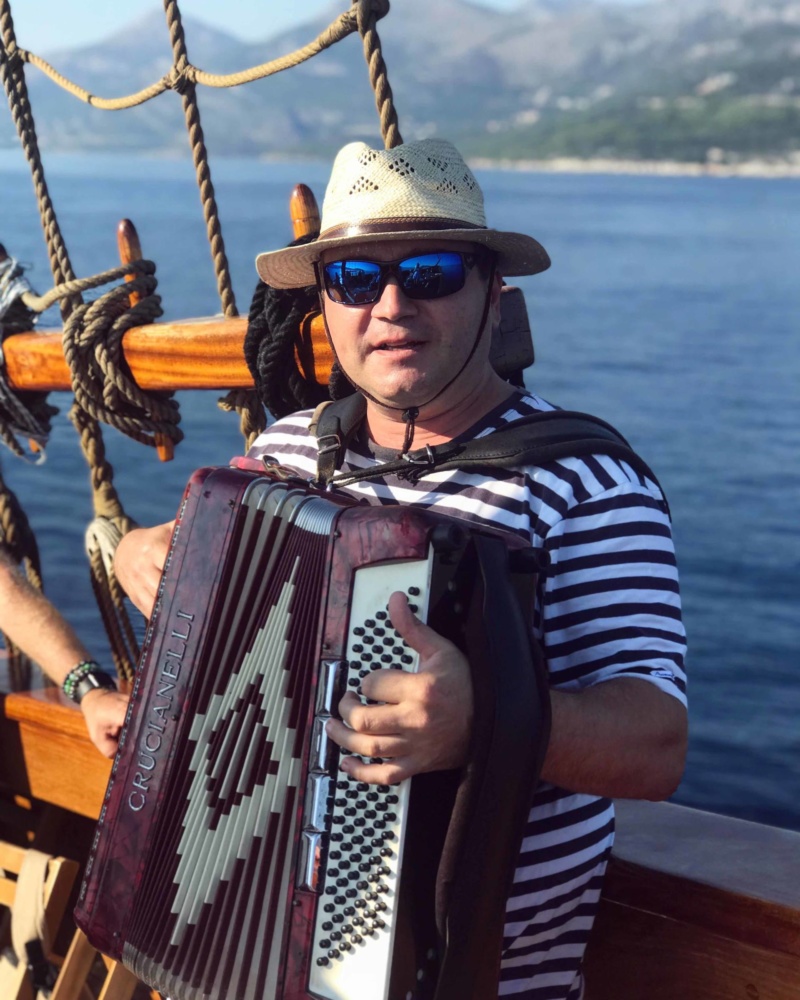 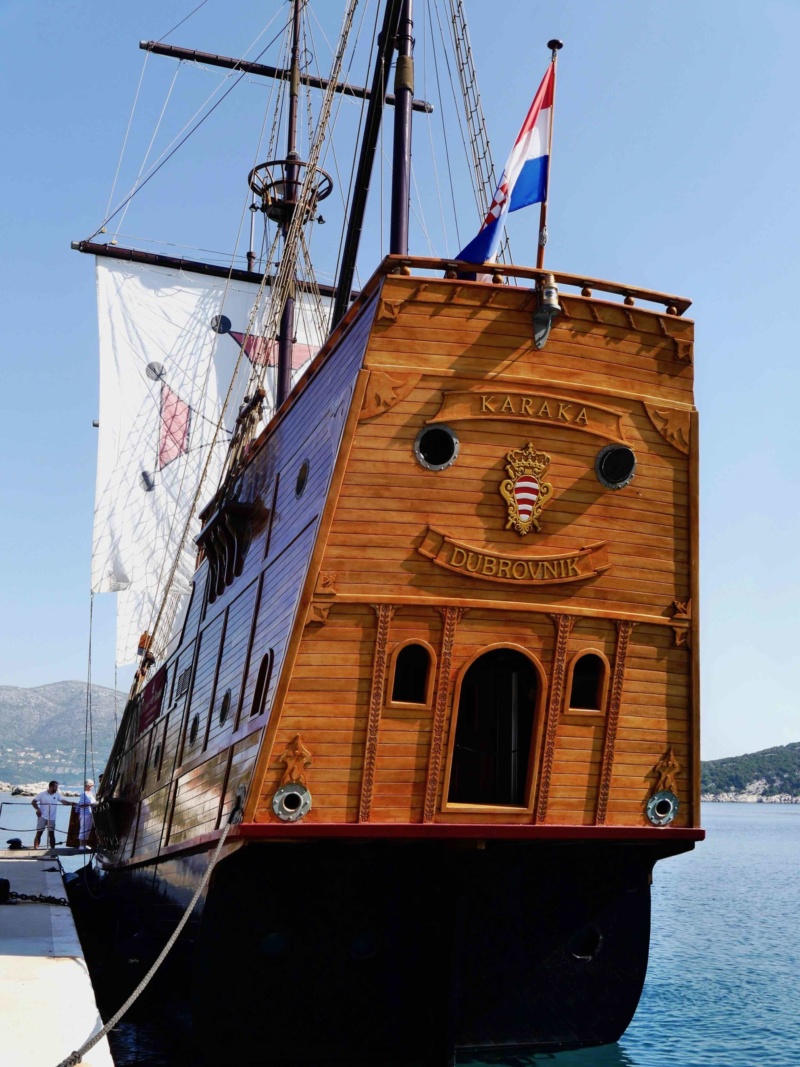 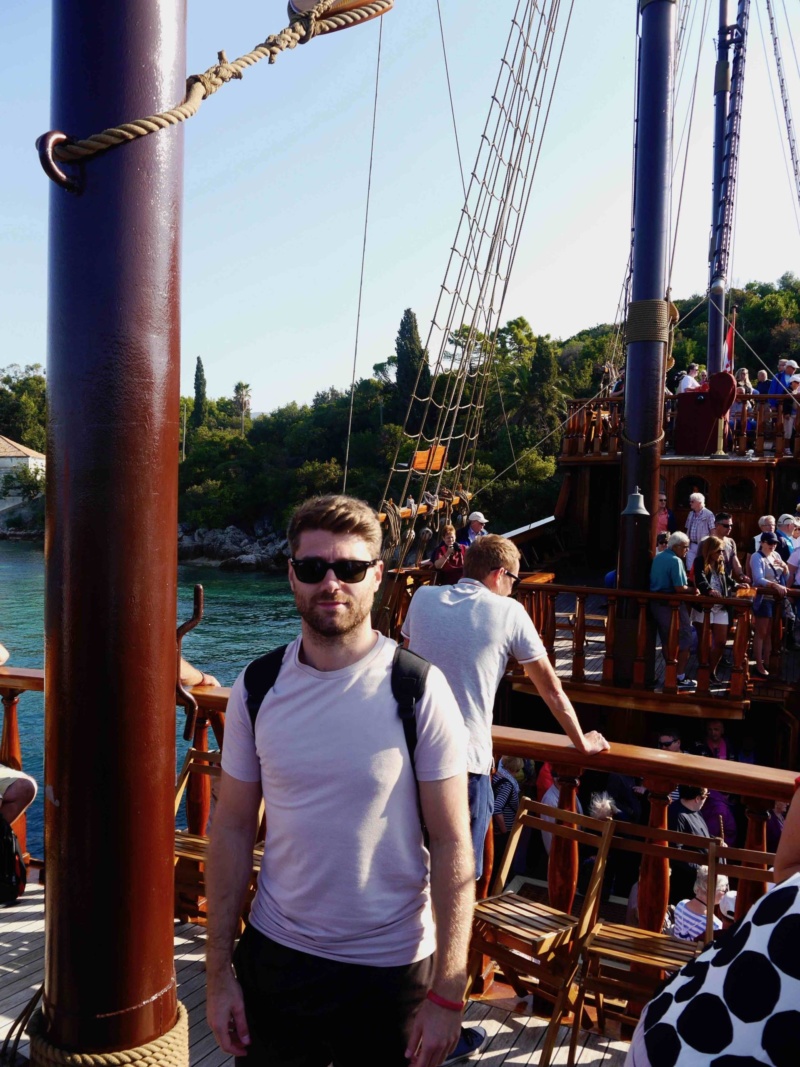 My Thoughts on Dubrovnik

Both Scott and I absolutely loved Dubrovnik. Our incredible hotel provided a luxurious and stress-free base to explore the wider town. The old town was atmospheric, full-of-life and incredibly photogenic. Getting lost in the narrow streets is an absolute pleasure. We loved eating out in the al fresco restaurants at night, when the streets were buzzing with people. I would say that the only downside to Dubrovnik is that its very expensive (more so than I had anticipated). I think the boom in tourism has lead to a steep hike in prices that would seem astronomical compared to the rest of Croatia. I was really surprised by the high cost of doing the most simple tourist activities such as catching the cable car or walking the city walls. Don’t let this put you off all together, but the cost is definitely worth considering before booking a holiday to Dubrovnik.

On a personal level, I think Dubrovnik was the perfect destination for us to spend our Babymoon. We were able to be active and adventurous when we wanted, and could retreat back to our luxurious hotel whenever we felt like it. Being pregnant, I did find all the walking to be a lot more tiring than usual, so we had to take things at a slightly slower pace. We enjoyed romantic al fresco meals, watched incredible sunsets and just enjoyed being a couple before our lives change for ever. Surely that’s what having a babymoon is all about? 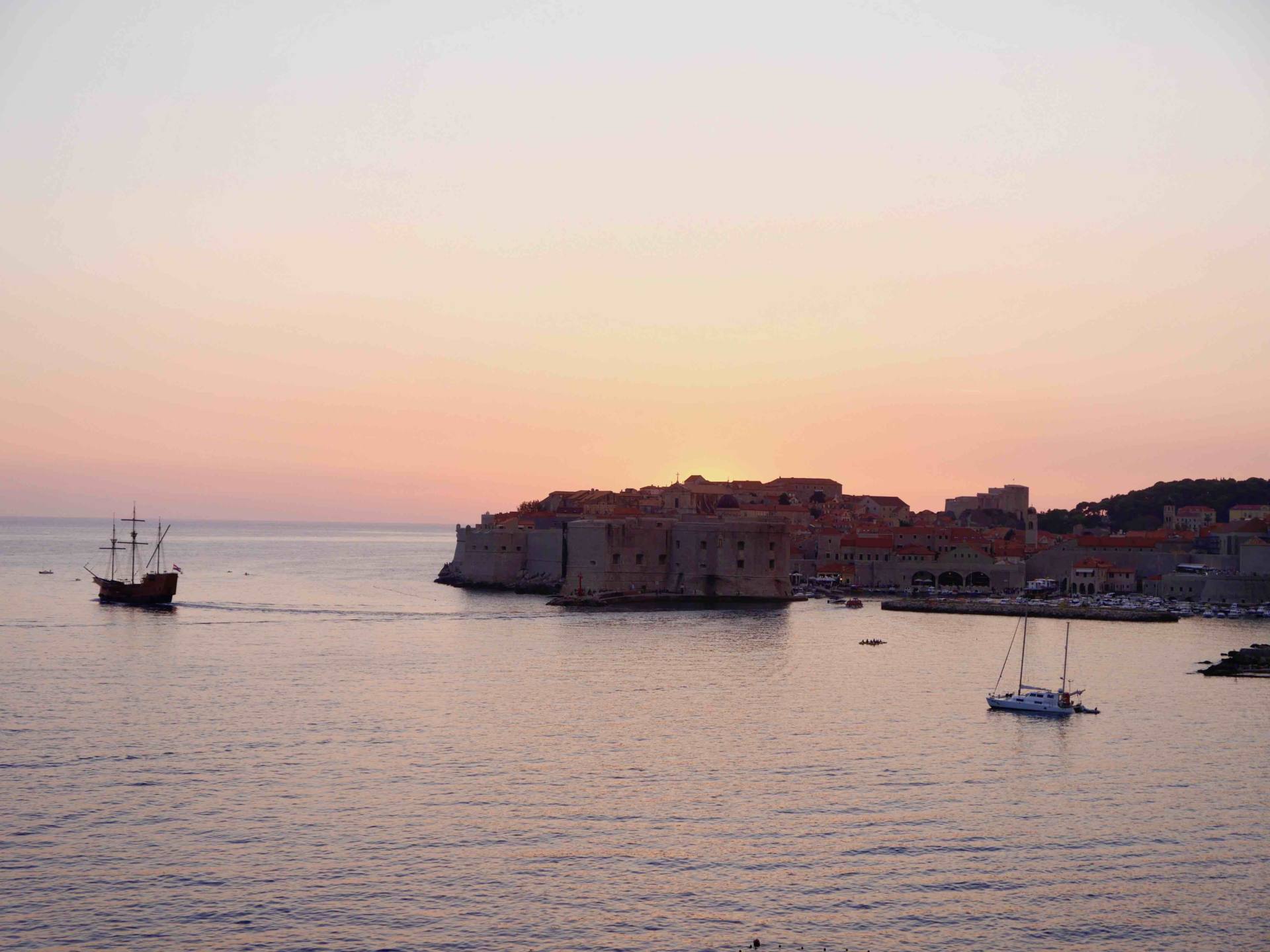 Read my Pregnancy Diary from Weeks 19-24

What did you think of my Babymoon in Dubrovnik? Have you visited Dubrovnik or is it somewhere you’d love to go? I’d love to hear your thoughts so please leave me a comment in the box below. Jess x

I was fully insured for my trip to Dubrovnik with UK-based travel insurance experts Insure and Go. They offer fuss-free single-trip policies as well as annual Worldwide travel insurance from just £45.99. 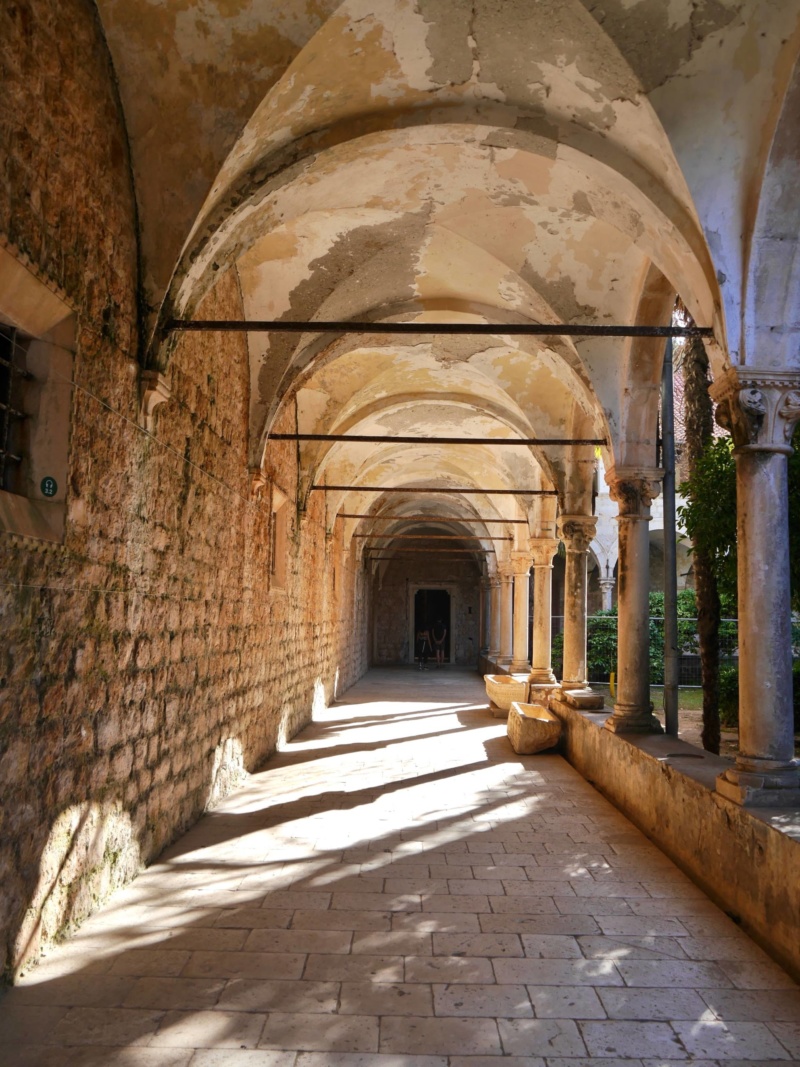 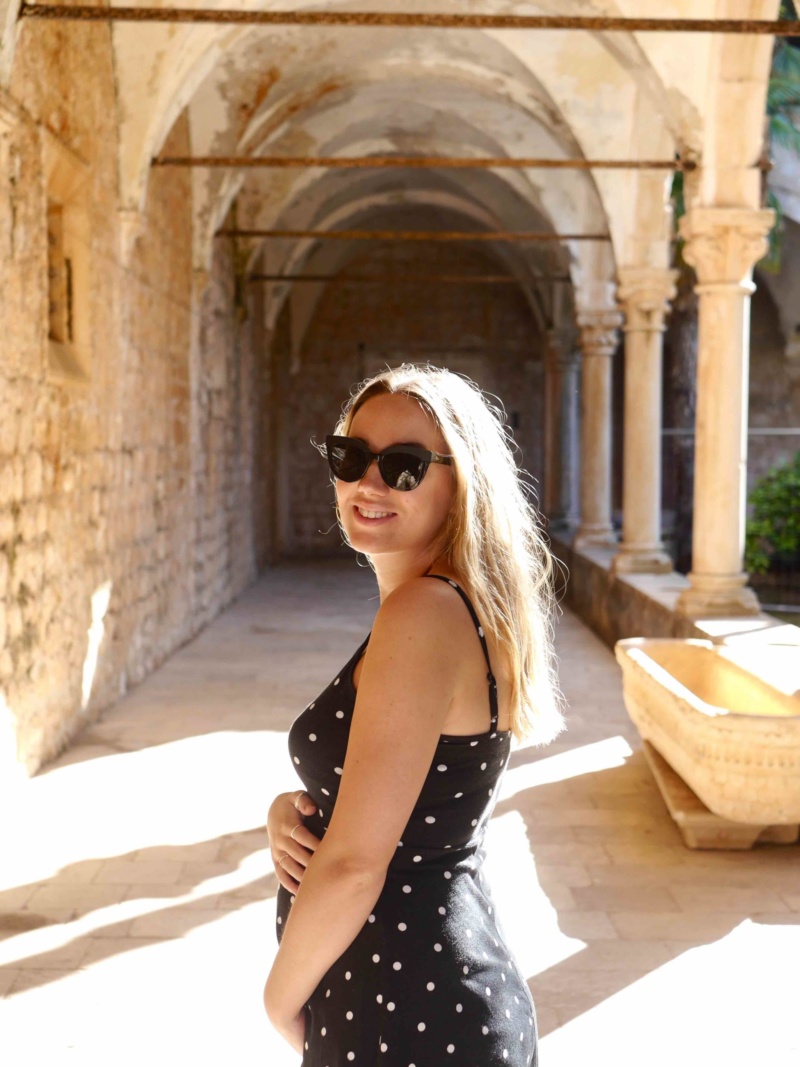 « My Pregnancy Diary: 19-24 Weeks
How to get the Best Black Friday Travel Deals »

Ad I’m not like a regular mom, I’m a cool mom

Ad On board and ready to roll! I’m cruising on E

Hi guys 👋🏼 I’m so excited to share that th

(Ad - press trip) If you’re in search of a luxur

Magic moments in Marbella 🌞✨ If anyone is pl