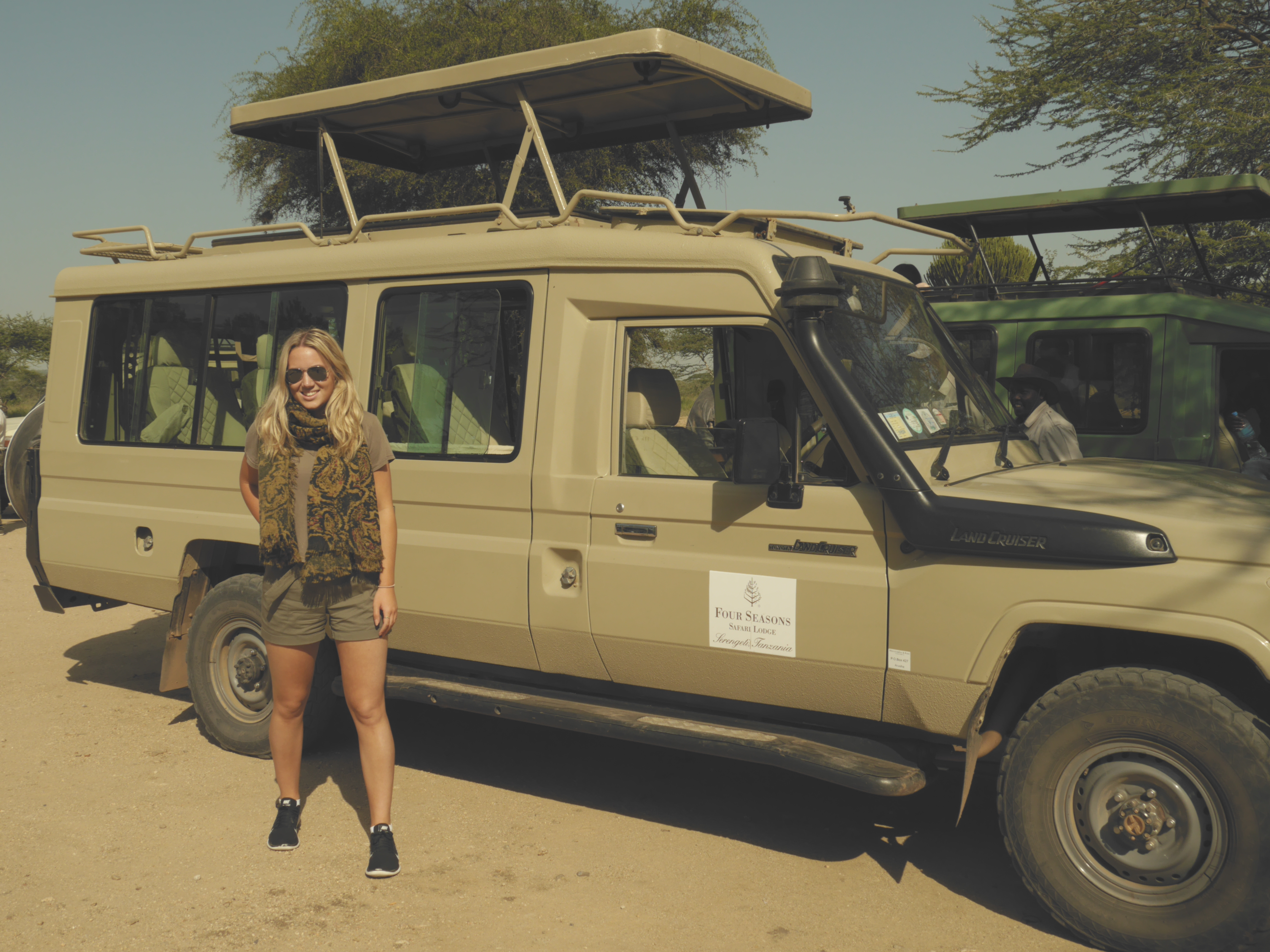 Last week I was lucky enough to embark on one of the most memorable travel experiences of my life and of my career as a travel writer so far, a 5 night Safari trip to The Serengeti, Tanzania. Going on Safari is something I have always dreamt of doing and thought the opportunity may come around later in life for a honeymoon or extravagant trip. But when I was offered the chance to stay at Four Seasons Serengeti and enjoy 4 days on Safari, it didn’t take much persuading to get me on that plane!

The whole Safari experience revolves around the animals. You set out each morning with a quest to see as much as possible, usually with cameras and binoculars at the ready. Safaris usually start really early in the morning at around 6am before it gets too hot, because that’s when most of the animals are about.

Each morning after breakfast we were met at the front of the lodge by our Safari Guide Priscus. Having worked as a guide in the Serengeti for 9 years, Priscus knew all the sand tracks like the back of his hand and drove us around in search of animals. He had eyes like a hawk and was able to spot animals from miles away and he taught us all about the animal behaviour and interesting facts along the way. Priscus’ friendly, engaging and knowledgable guidance made the whole Safari an even more enjoyable experience.

One of the goals on Safari is to spot ‘The Big 5’, which include elephants, lions, buffalos, leopards and rhinos. Spotting the ‘Big 5’ is becoming increasingly difficult in Tanzania as their rhinos are now extremely endangered due to hunting and poaching.

There are only about 20-30 in the whole of Tanzania now but lots of great conservation work is being done to help the population grow. So whilst I didn’t see a rhino, I did see so many animals and some EXTREMELY close encounters. Scroll down to see what I spotted whilst on Safari in The Serengeti…

We saw the majority of the lions on our first game drive of the trip, which made for even more WOW factor. After visiting a few Kopis (rock formations) we found a group of 4 male lions sunning themselves on the rocks and a lone male lion chilling in the grass. I couldn’t believe how close we were to them and we even saw a roaring match between 2 lions on the rock both fighting for the same terratory.

Seeing so many elephants had to be the most magical part of the safaris. The sheers size of them is enormous and seeing them so peaceful in the wild is something really incredible. We saw close to 100 elephants in total during our safari, but we had one very close encounter where a lone male elephant was walking down the same road as us. We stopped the jeep and he walked straight past us completely unphased.

We also saw plenty of elephants everyday at our base camp, the Four Seasons Serengeti, as it’s beautiful location overlooks a natural watering hole where tribes of elephants visit daily.

Giraffes were another exciting spot on Safari and because of their great height we were able to spot them from a great distance. Like elephants, giraffes also tend to travel in tribes / families and it is an amazing sight to see them roaming free. This guy photographed below walked straight past our track and perfectly stopped and posted for a camera. Our guide Priscus explained that they are known as the supermodels of the Serengeti!

Visiting the Serengeti in June is a brilliant time because you get to see the Great Migration, where hundreds of thousands of wildebeests migrate through Tanzania’s Serengeti up to the Kenya’s Masai border. They migrate towards richer grasslands and this happened every year around June. We were told that this year’s wildebeest movement was quite erratic and they would have usually moved on from the area we were in, but their late departure meant that we got to see thousands of stampeding wildebeest running through the Serengeti.

Zebras also get caught up in the Great Migration and move with the Wildebeests, so we also saw thousands of them too. They are so common in the Serengeti that by the end of the Safaris we didn’t bat an eyelid at seeing them roaming around. I loved how Zebras are very communal animals and often stand head to tail in pairs to protect each other’s blind spots from predators.

Hippos were more of an unexpected spot but their behaviour absolutely fascinated me. They would stand in rivers all day to keep their bodies cool in large groups. Every so often the hippos would snap at each other with their huge mouths and have a bit of a spat, and there was a huge group gathered in a river near our safari camp. Priscus told us that Hippos are extremely dangerous animals and are surprisingly the biggest cause of human injury in the Serengeti.

We didn’t see any hyenas until the final game drive of the trip as the sun was going down. One sight we saw was a pack of hyenas eating a baby giraffe which was a tragic yet compelling thing to see. Crowded round the giraffe and the hyenas were vultures waiting to pick up the left overs. It really was like something out of The Lion King

Talking of The Lion King, I also saw Timone and Pumba (warthogs and meerkats), which were always hanging out with each other in similar areas. We also spotted a few leopards keeping cool in a tree, ostriches doing a mating dance and hundreds of gazelles, springboks and impala.

Seeing all of these animals roaming wild in the Serengeti was an unreal experience that will stay with me for the rest of my life. It’s such a joy to see them all so free, protected and content. I loved the close encounters with the elephant and the lions and seeing them all in the heart of the African Serengeti is something that feels out-of-this-world and totally magical.

Have you been on a Safari or are you planning on going on one? If you enjoyed this post please comment on the box below, and be sure to tell me about your own Safari experiences! x