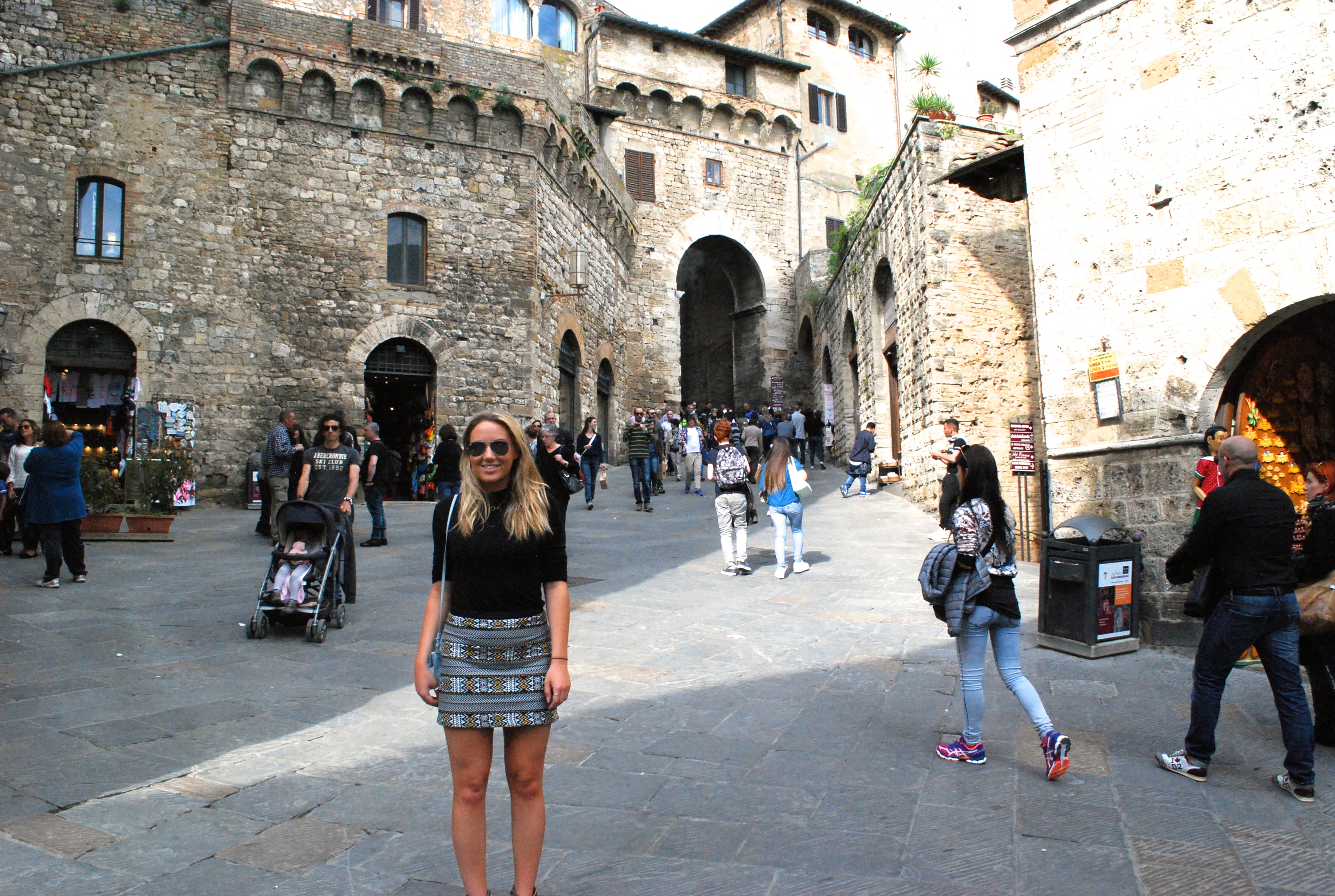 Last week I embarked upon a road trip adventure through the rolling hills of Tuscany. With multiple stops, hotels and towns to visit, it’s a trip I had been planning for quite some time. This time I was very lucky to be able to bring my boyfriend along, who didn’t take much convincing to be my plus 1! Thankfully he also doubled up as great travel buddy, driver and photographer. Here is part 1 of my Tuscany road trip…

The trip first came about as I was invited to go and experience a stay at the Castello di Casole, a beautiful 5 star property in the Tuscan countryside. Being equal in distance from both Pisa and Florence, it provided a luxurious base for exploring the surrounding area.

Because of Castello di Casole’s amazing location, I decided to turn it in to an opportunity to visit as many Tuscan towns as possible in a little 5-day adventure. In order to optimise our time, we strategically booked flights into Pisa and out from Florence. We also collected our hire car in Pisa and dropped it off in Florence. This way we could plan an A to B route without having to retrace any ground. Perfect! Our route for the trip was as follows;

Here’s Part 1 of what I got up to on my Tuscany road trip.

Our British Airways flight from Gatwick landed into Pisa at about 1.30pm. The flight only took 1hour 30 minutes and after taking a few long haul flights recently, it felt as if we were in the sky for no time at all. As soon as we landed we jumped on a transfer bus to the car hire terminal and went to collect our hire car. After a bit of tedious admin and grown-up insurance talks, the keys were handed over and freedom was ours!

We had originally booked a new Fiat 500 but we ended up with a Silver Corsa, perfectly zippy for getting around the winding country roads. We took the car for its first test drive into the centre of Pisa, our first stop of the trip. Being only 25 minutes from the airport and with fairly simple roads, it was an easy drive for Scott to get to grips with driving on the right hand side of the road (his first time driving in Europe).

Of course landing in Pisa it would have been rude not to make the Leaning Tower our first stop of the trip, so off we went into the centre of town to see one of the 7 Wonders of the World. The Tower is located in the Piazza dei Miracoli along with the cathedral, baptistery and cemetery, which together make up one of the finest architectural complexes in the world. Before visiting Pisa I had no idea that the leaning tower is just one of the many stunning buildings in the complex and because of it’s fame it outshines the spectacular cathedral, which is also well worth a visit. One thing I didn’t realise about the tower before visiting is that you can actually still climb up it to the top!

We had just enough time to stroll around the walled piazza, take our obligatory photos and stop for our first gelato before heading back to the car for our 2 hour drive to Castello di Casole (keep an eye out for a full hotel review on the blog soon)

After a delicious breakfast of omelette and an Italian cappuccino, we were up and raring to go on our first full day of the road trip. Casole d’Elsa is the closest town to the Castello di Casole and was the smallest of the towns we visited.

Located on the top of a hill and surrounded by green countryside, Casole d’Elsa is a sleepy little Italian town with picturesque streets, historical buildings and not a single tourist in sight! There are only a handful of restaurants and you wouldn’t need more than 1/2 a day to explore the whole town, so we arrived mid morning and stayed ’til lunch.

The concierge at Castello di Casole kindly recommended a nice restaurant for us to have lunch in, which we stumbled across before we even went looking for it. The restaurant was called Caffe Casolani and was a few minutes walk from the main piazza of the town.

Tables stretched along the street and beautiful vines grew up the sides of the wall. I had the feeling this place hadn’t changed a bit since it opened. When the waiter brought out our menus we were presented with a piece of paper with Italian scribbled all over it, so it had to be authentic! Asking for an English menu probably would have been out of the question (let alone very uncool) so we did our best to translate and took a gamble on what we ordered!

My dish turned out to be a simple pasta dish with the most delicious and fresh pesto. With a glass of red wine on the side, it was absolutely perfect.

After lunch we found a beautiful panoramic spot at the end of the town before jumping back into our car to continue our Tuscany road trip in San Gimignano. This town had been recommended to me by a contact who had also visited Castello di Casole and it turned out to be my favourite stop of the whole trip.

San Gimignano is much larger than the sleepy town of Casole d’Elsa, but still much smaller than the likes of Pisa, Siena and Florence. The walled medieval hillside town is brimming with history and famous for having the best gelatos in Tuscany. San Gimignano is home to a total of 14 medieval towers which have been amazingly preserved and make for a beautiful terracotta sky line when approaching the city.

The sun was out and there was a real buzz in the air as we walked through one of the walled gateways of San Gimignano. It immediately felt much more touristy than Casole d’Elsa with lots of people wandering around. We made our way through a winding street lined with ceramic shops and arrived at the central Piazza del Duomo in search of Gelato.

Whilst we had been told that San Gimignano was the place to get THE best gelato, we didn’t know exactly which gelataria to head to. So we took our chances on one of the two establishments in the central piazza called Gelateria Dondoli. Both had huge queues outside them, but when we saw that this place was named ‘Gelato World Champion’, we decided to hedge our bets and give it a go.

As with most of the gelaterias in Italy, there were endless choices in terms of flavours but I went for a hazelnut and nutella combo. Was it the best gelato I have ever had? Absolutely, without a doubt, 100% yes!

Gelatos in hand we found a sunny spot in the piazza to sit and soak in the atmosphere. Musicians filled the square with music and we stopped to watch a traditional Punch and Judy puppet show which had a crowd of kids engrossed. Top things to do in San Gimignano include climbing the Torre Grossa (the town’s tallest tower with breathtaking countryside views), the selection of Town Museums and the slightly dark but ever so fascinating Museum of Torture.

What did you think of part one of my Tuscany road trip? Have you visited any of the towns mentioned or are you planning a similar trip? I’d love you to leave a comment for me in the box below if you enjoyed this post x Stay tuned for parts 2 and 3 hitting the blog later this week!

« My Top Travel Tips for Dubai
How to Spend A Day in Siena, Italy »