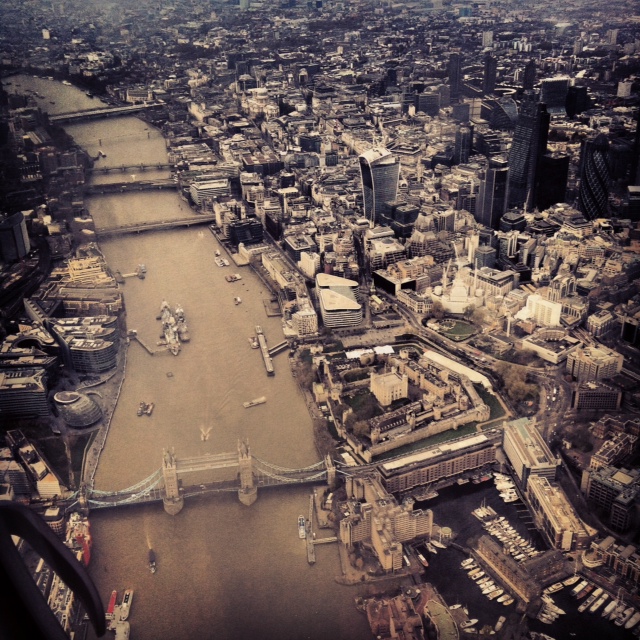 Who do you think of when you hear helicopter ride? Kate and Wills, business tycoons, gazillionaires? Yeh me too! But now you can add The Travelista to that list, as last weekend I got to travel over London VIP style. The experience came courtesy of the lovely people at The London Helicopter – who operate helicopter sightseeing experiences over London to anyone that has the desire – and bottle – to do so (take that Kate and Wills!)

Waking up last Sunday with a slightly sore head from the escapades of the night before, I made my way to Battersea Heliport. I had a warm welcome and was offered a much needed coffee as I watched the flight before me take off. After meeting the other people on my flight (just 3 others) and short safety briefing, we had our harnesses on and were clambering into the helicopter itself.

The pilot was a lovely chap who reassured us we were in safe hands. Having been on a helicopter once before in La Reunion, it all came back to me and I was so excited to get in the air and see London from a totally new perspective. As a bit of an adrenaline junkie, I loved that leaving-your-stomach-behind feeling as we took off into the skies. Within just a few minutes, we were above all the buildings and gaining altitude.

Seeing the skyscrapers of the city was a definite highlight for me!

Not only did the pilot treat us to a seamless take off, he gave a running commentary about what was below us and what we should look out for. Wearing headsets meant we could hear his commentary as well as ask any questions. One of the first spots was Buckingham Palace. I loved seeing it from above and into the palace gardens, no sign of the Queen though!

We followed the meanders of the Thames and saw all the major Westminster sights including Big Ben, The Houses of Parliament and the London Eye. I never realised how so much of London’s biggest landmarks and buildings all sit by the river.

My favourite photo from the flight!

As we hovered along above the Thames we made our way towards the city. It felt so crazy to be so high above London’s tallest buildings and it was amazing to see the Shard from such a unique angle. You can spot the skyscrapers of the city from miles off. They’re all so compact. We went further east along the river and got to the O2 Arena, the Greenwich Maritime Museum and Canary Wharf and the O2 Arena, which gave me slight déjà vu of the Eastenders opening credits!

Me being me, I was photographing, videoing, instagramming and instavidding the whole flight, but for a brief 5 minutes I put all the technology down and just took in the views. It was so visually breath-taking and definitely one of the coolest things I’ve ever done in London. The flight lasted 20 minutes but I was so in awe, it went in the blink of an eye.

If you’re looking for an exciting and alternative way to see London and have a few bob spare (£199 to be precise), I would whole heartedly recommend a flight with The London Helicopter. It’s a once in a lifetime experience that I will definitely never forget.

What did you think of my VIP flight experience? Have you experienced a helicopter ride or thinking of doing so? If you enjoyed this post leave me a comment in the box below and say hi!

N.B This experience was supplied complimentary by The London Helicopter for blogging coverage on The Travelista.