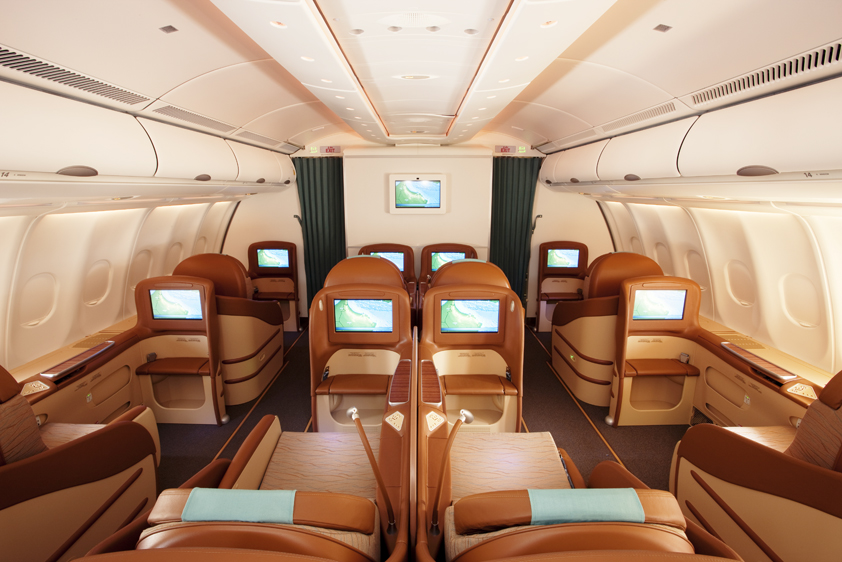 When I was on my second ever press trip back from Mauritius, I was thrilled to discover that our ‘press’ party had been upgraded to First Class thanks to Air Mauritius. Travel Perk #63094

The first class experience began well before take off. Our tickets gave us access to the VIP area in the departure lounge, which was full of comfy sofas, pastries, refreshments and a few alarmingly well fed businessmen. As a bunch of travel journos used to budget flights, we all tried to remain as casual as possible about the freshly baked pain au chocolats and the astonishing array of free glossy mags just waiting to be devoured on the flight home.

As we boarded, walking to the left of the airhostesses rather than the right felt as if I was walking into some forbidden parallel universe. Behind the ‘privacy curtain’ I went and went to find my seat. With only 2 seats per row (as opposed to the hellish 2-4-2 formation in economy), my seat space was ridiculously expansive. I had officially moved house from a bedsit to a mansion.

No sooner had I sat down and worked out what all the buttons on my arm rest did, I was faced with the friendliest air hostess I’d ever met. I immediately noticed the difference in level of service.  The icing on the cake was a complimentary travel bag filled with goodies from L’Occitane and I began to think that first class might be worth the colossal cost after all.

Next came the champers, which was being generously dished out in glass champagne flutes to all the first class passengers. Whilst the honeymooners and business men willingly obliged, us journos were all a little worse for wear from the night before and had to decline – much to the air hostesses’ surprise. I think it was something we all began to sourly regret once we realised we had just passed up the opportunity to sup champagne in first! But receiving my lunch on real ceramic crockery and eating it with silver cutlery on a white tablecloth more than made up for it.

After the excitement had all died down I decided to watch a film on my larger-than-normal TV screen and curly up in my softer-than-normal blanket. As I began to recline my seat to horizonal – yes horizontal – I took a moment to think of all those poor souls curling up on their minuscule economy seats, with multiple babies shrieking from all angles. It was the first time ever I had slept like a baby on board a flight.

The difference between economy and first on Air Mauritius is like night and day, but did it change the experience change my verdict on air travel? Undoubtedly, that flight home from Mauritius was the most pleasant and relaxing long haul flight of my life.  It epitomised the concept of ‘first class service’ and if I were travelling for a very special occasion or had the disposable cash to do it, I wouldn’t think twice. It was an amazing travel experience that I love to share with people, and wonder if I will ever get to do again?

Find out what I was doing in Mauritius here…