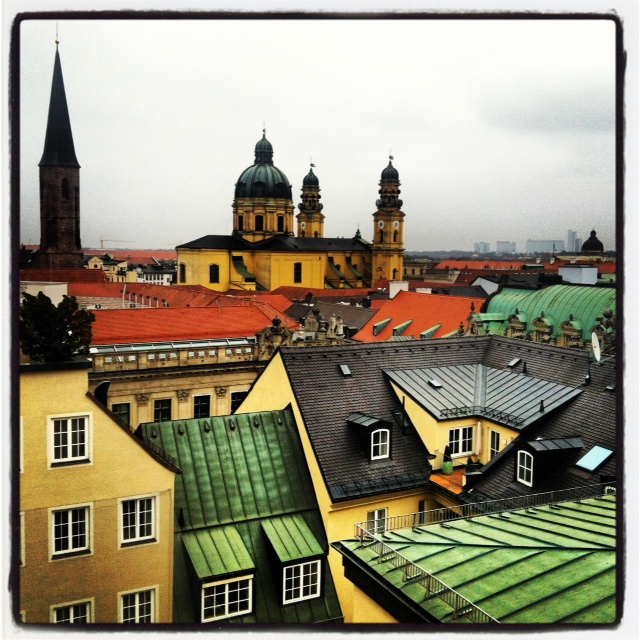 Having recently done all the European ‘biggies’ (Paris, Rome, Barcelona) I decided I wanted to try and see some of the smaller and lesser known cities in Europe this year. I had heard a lot about Munich being a trendy and upcoming destination with double the charm and half the crowds of other oversaturated European cities. So when I got invited to experience it on a super lux press trip, I was there with bells on.

We touched down in Munich airport on Friday night and luckily had a speedy reunion with our baggage, we picked up by a swish Audi and whisked off to the centre of Munich. After a 30minute drive we pulled up outside our grand hotel and stared in awe of an unexpected Micheal Jackson shrine that stood imposingly outside the front of the hotel complete with glowing tea lights. When the driver noticed me staring, he explained ‘Micheal Jackson and baby – zis hotel’. After a quick moment of translation I realised he meant  the hotel was in fact the hotel that MJ dangled his baby Blanket out of back in 2002 as well as lived in for 3 months. (If it’s good enough for Michael its good enough for me)

The hotel happened to be the super luxurious 5* Bayerischerhof Hotel, which is a fourth-generation family run hotel located on the Promenadeplatz. Oozing history, grandeur and character, the hotel was a perfect central base for exploring the city (within moments of stepping into the hotel it was clear why it’s long been known as the main haunt for all visiting celebrities and big wigs). After a late night dinner and a few Mai Tai’s at Trader Vic’s Polynesian restaurant, I was ready to get some sleep for a busy day ahead. 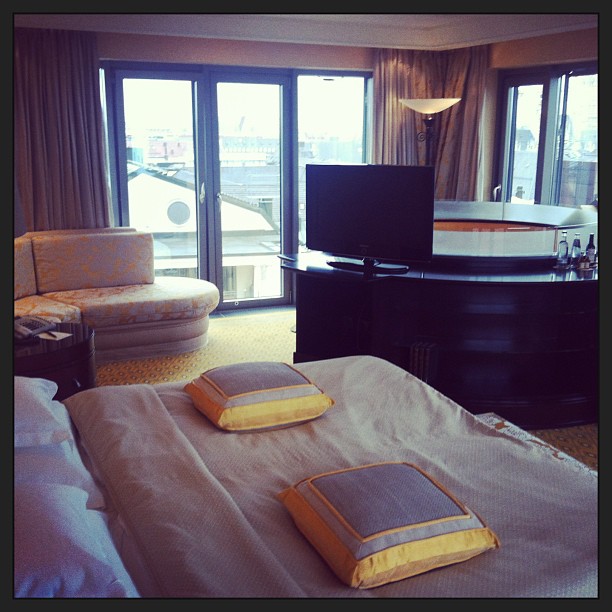 One of the suite bedrooms with amazing views of Munich

On Saturday morning I was up early and ready to explore the city. We decided to start the day with a guided city tour which was spent half on mini-bus and half on foot (a perfect combination if you ask me). As we began our tour of the city I was struck by Munich’s blend of wide tree lined streets (such as the ever-so grand Leopold St) with the central cobbled passage ways. Along with quaint squares and the many traditional Bavarian buildings, Munich is unique and extremely picturesque. I’d recommend staying in one of the more central Munich hotels to ensure all of the cities central loveliness is right on your doorstep. Unlike the highly cosmopolitan capital of Berlin, Munich maintains a much more relaxed atmosphere, which gives it its nickname of ‘the village of 1 million people’.

Our tour took us past all of Munich’s most iconic buildings including the Gasteig Cultural Centre, the famous Munich Opera House, Maximillian St (Munich’s answer to Bond Street), the Hof garden, the Frauen Church and Oktoberfest HQ. We also passed the Munich Sealife Centre which would be a great choice for families, or big kids! My favourite part of the tour was seeing Munich’s most bizarre sight, the river surfers. Yep you read that right; the river Isar runs through the centre of Munich and creates a huge natural wave underneath one of the bridges. Ever since one crazy person decided to tackle the wave with a surf board, it’s become Munich’s #1 craze ever since!

Our tour ended with a drink in one of Munich’s famous Hofbrauhaus brewery, which boasts a huge Bavarian beer hall complete with traditional and the biggest pretzels I have ever seen! Despite not being a beer lover myself, I took the when in Rome approach and decided to sample the local delights. Visiting the brewery was a great way to do something typically Bavarian and generally just soak up the atmosphere. Carrying on the theme of German ‘tipples’, we headed back to the hotel for an extravagant meal and numerous bottles of German wine!

Day 2 included a trip to the well-known Haus der Kunst, Munich’s centre of modern art comparable to the Tate London. Feeling slightly woolly from the events of the night prior I was surprised at how much I enjoyed the exhibitions, especially Kendell Geers exhibition on the South African apartheid. Sounds like heavy stuff I know – but it was actually extremely interesting and I’d highly recommend a visit.

The rest of my trip consisted in a bit of Sunday afternoon ‘wind down time’ complete with massage, sauna and steam room session (goodbye German alcohol). With a flight time of just 1hr 30 mins from the UK, bags of attractions and culture and endless bars and restaurants, Munich is a highly underrated city and makes for the perfect European short break destination. I fell in love with the city and genuinely can’t wait to return.

Have you ever been to Munich? Tell me about your experience!

« A Mini-Cruise to Amsterdam
My Helicopter Ride in La Reunion, Indian Ocean »