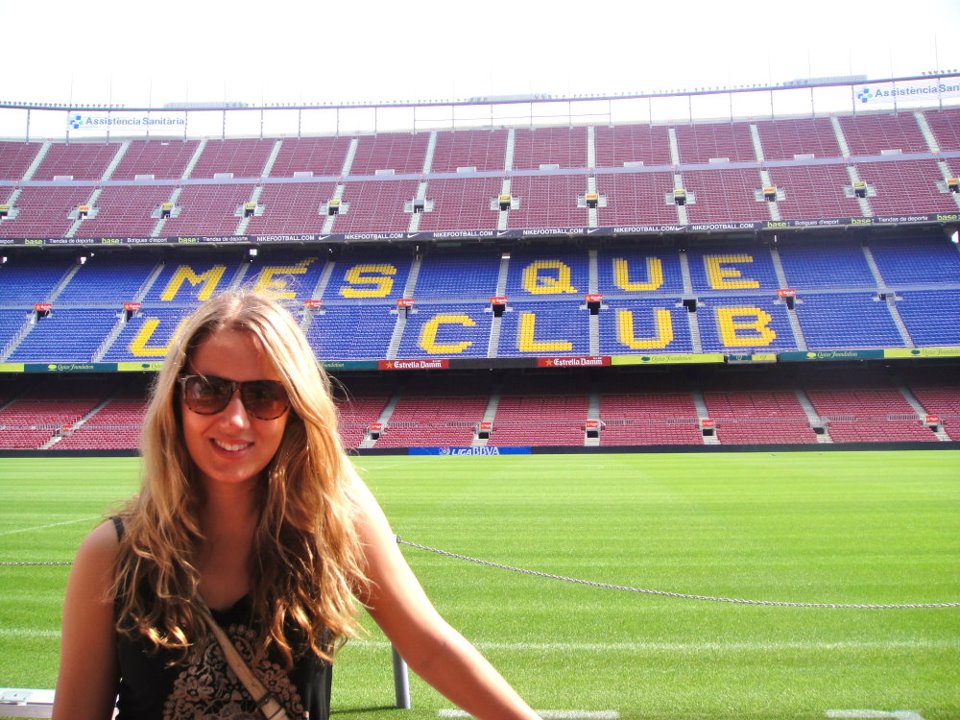 Ever since watching the film Vicky Christina Barcelona with a my girlfriends back in my University days, Barcelona had long been at the top of my travel hit-list. Seeing the Barcelona-based film inspired me to visit the famous Catalan city, and although the plot involved a steamy summer romance with a very sexy Spaniard (played by Javier Bardem), this was surprisingly only one of the reasons why I wanted to go. The film perfectly showcased the city’s stunning architecture, buzzing atmosphere and al-fresco way of life, which gave me more than enough reason to book a 7 night holiday there. So speaking from my travel experience, I thought I would share with you some of my highlights, recommendations and inside tips so you too can fall in love with Barcelona…

After an early morning 2 hour flight from Heathrow, we arrived at Barcelona El Prat International Airport around 10am and were greeted by glorious sunshine and blue skies. Stepping out of the intensely air conditioned airport I was immediately hit by the contrast of the Spanish heat. I couldn’t wait to explore the city and, more importantly, to try every type of tapas under the sun. We were city centre bound in a matter of minutes by hopping on the Aerobus Express, a nifty little service which took us right to the central Plaza de Catalunya. If you’re staying centrally, this is a great option as you can get a return ticket for only €9.75 – much cheaper than taxis.

Being a bit of a travel geek, I dug my teeth into copious Barcelona travel guides before arriving and had already picked out the top sightseeing highlights for our to-do list. So after settling into The Hotel Icaria, we set off in search of the infamous Las Ramblas, Barcelona’s most famous street. Being a melting pot of colourful street entertainers, artists, overpriced cafes and heaps of European charm, it’s no surprise that Las Ramblas is the city’s tourist hub. Whether you love it or hate it, no trip to Barcelona complete without a stroll down Las Ramblas and doing this first was a great way to kick off our trip.

Barcelona is somewhat of a shrine to the Catalan Architectural genius Antonio Gaudi, whose iconic work is featured all around the city. The Sagrada Famillia is a stunningly futuristic Cathedral and is Gaudi’s most famous work. People go mad for this place and are more than willing to, quite literally, queue around the block. Despite the tourist queuing politics, it’s well worth a visit, so make sure you visit early or late in the day to beat the masses. My favourite Gaudi attraction was Park Güell; a playful garden featuring colourful sculptures and the famous mosaic wall. We got lost amongst the winding pathways and stumbled across a beautiful cityscape view of Barcelona.

Personally, I believe no holiday is complete with a bit of retail therapy and at the top end of Las Ramblas lays Catalunya, otherwise known as a shopper’s paradise. As my companion was of the football mad malevariety, I diplomatically traded an afternoon of shopping with an afternoon at the Barcelona FC Nou Camp Stadium, which was surprisingly enjoyable! We hopped around from place to place on the Metro, Barcelona’s underground transport system. The Metro was efficient, cheap and air conditioned (hallelujah) so was perfect for us. A T10 ticket allows you to take 10 journeys for only €9.25, less than €1 per trip!

Without a doubt, one of the best parts of the trip was getting to sample all of the amazing Catalan cuisine on offer. I ate the best tapas I have ever had and developed a rather worrying addiction to the Catalan’s equivalent to garlic mayo; Alioli.  Fresh ciabatta bread drenched in olive oil and tomatoes (Pan y Tomates) is served as a complimentary starter in every restaurant, and is also to die for. When it comes to evening dining in Barcelona, things don’t start hotting up til at least 10pm. Being a bunch of clueless Brits, it took us a couple of nights to catch on to this, but if you can kerb your hunger til then you’ll be eating amongst the locals instead of the tourists.

For fantastically authentic and great value tapas, head to the Eixemple district, which is home to a long grand Parisian-style street with endless Al-fresco restaurants and a lively atmosphere. Being based on the coast, Barcelona’s seafood is fresh, tasty and cooked with love. If you don’t mind forking out a bit extra, chic white table-cloth restaurants along the marina are all of a high standard and are perfect for romantic candlelit dinners. The signature seafood Paella is a must, as is the Sangria (although speaking from a couple of woozy lunch stops, it is a lot stronger than you think!).

We chose to stay at the Hotel Icaria because of its close location to Barcelonetta beach (10 minutes walk) and the Olympic Harbour (15 minutes walk), as well as its easy accessibility to the old town (a few metro stops away). As we had a full 7 days to play with, we could afford to combine relaxing beach days with cultural city days, so it was a great option for us. Hotel Icaria has thoroughly earned all 4 of its stars, with friendly staff, great food and modern décor. The pool area was lovely and private but quite small so felt a little crowded at mid-day when all the hardcore sun worshippers emerged.

On our last night, we rounded up an unforgettable trip by indulging in cocktails at the 5 star W Hotel. Located on the very edge of the Port Vell Marina, the W Hotel reminded me of a mini Burj Khalifa and boasts stunning views of the Barcelona coast line. Barcelona is a unique city which offers the rare combination of golden sandy beaches and endless culture and for that reason; it is my number 1 European destination.